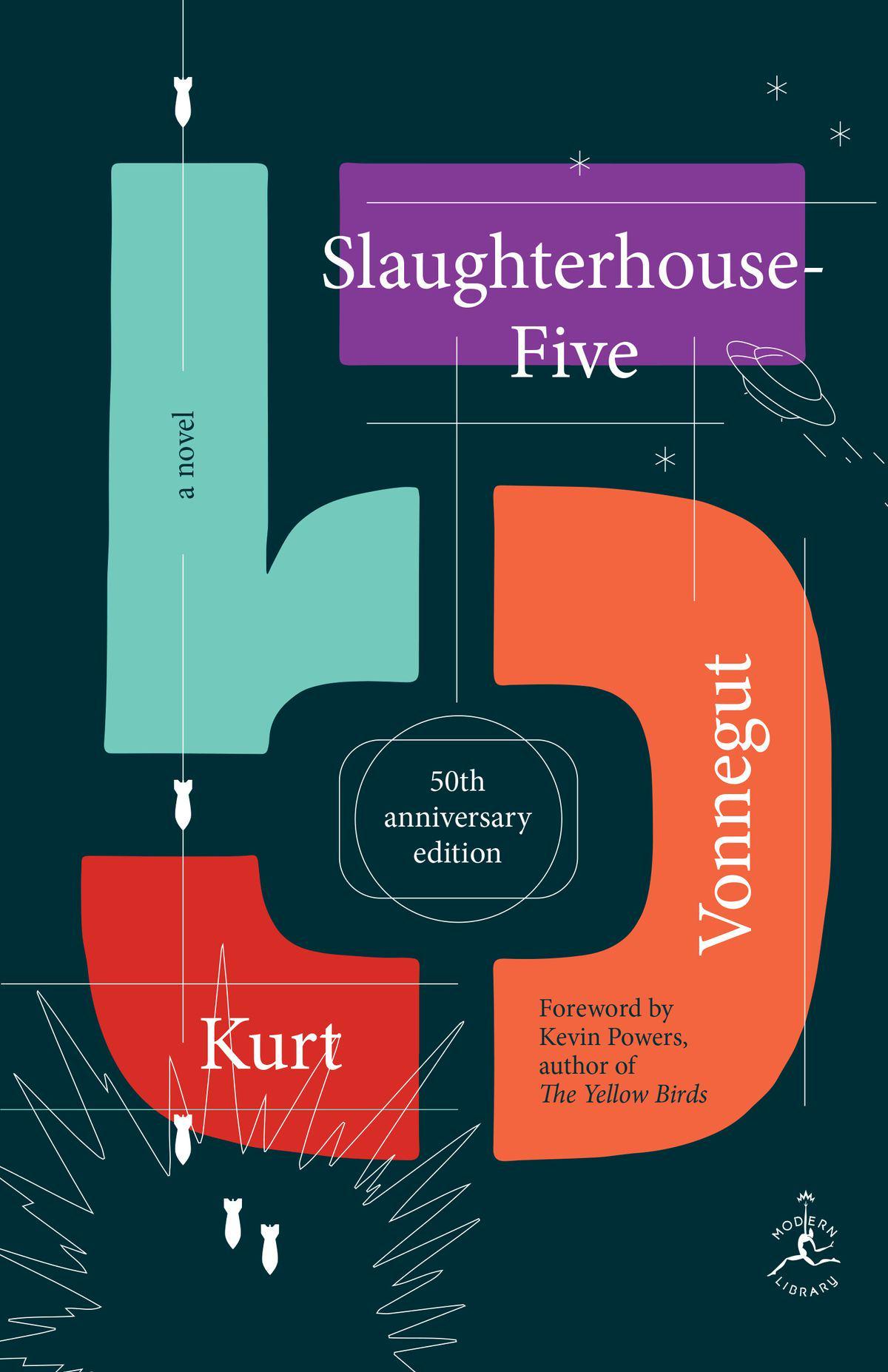 Finally got around to reading SLAUGHTERHOUSE-FIVE by Kurt Vonnegut after every goddamn American I know recommended it to me upon finding out about my travels to Dresden. And for good reason. THIS BOOK IS FANTASTIC!

This has got to be the most non-linear thing I've ever read in my life, but it is not the least bit confusing. Also one of the most engrossing. I don't remember being so engrossed in a book since THE AMAZING ADVENTURES OF KAVALIER AND CLAY.

It may also be one of the most quotable books. It is also a book with a heart, a book with a mission. It's an anti-war book. And one that manages to be laugh-out-loud funny.

But perhaps most astonishingly is that its an anti-war book that has no villains. This is World War 2. There are Nazis.

When was the last time you read or saw anything WW2-related that contained no villains to speak of? And the book is perfect, I tell you. Perfect!

Vonnegut even comments on that in the book.

I think about my education sometimes. I went to the University of Chicago for a while after the 2nd World War. I was a student in the Department of Anthropology. At that time, they were teaching that there was absolutely no difference between anybody. They may be teaching that still.

Another thing they taught was that nobody was ridiculous or bad or disgusting. Shortly before my father died, he said to me “you know – you never wrote a story with a villain in it.”

I told him that was one of the things I learned in college after the war. SLAUGHTERHOUSE-FIVE by Kurt Vonnegut. Everyone should read it. 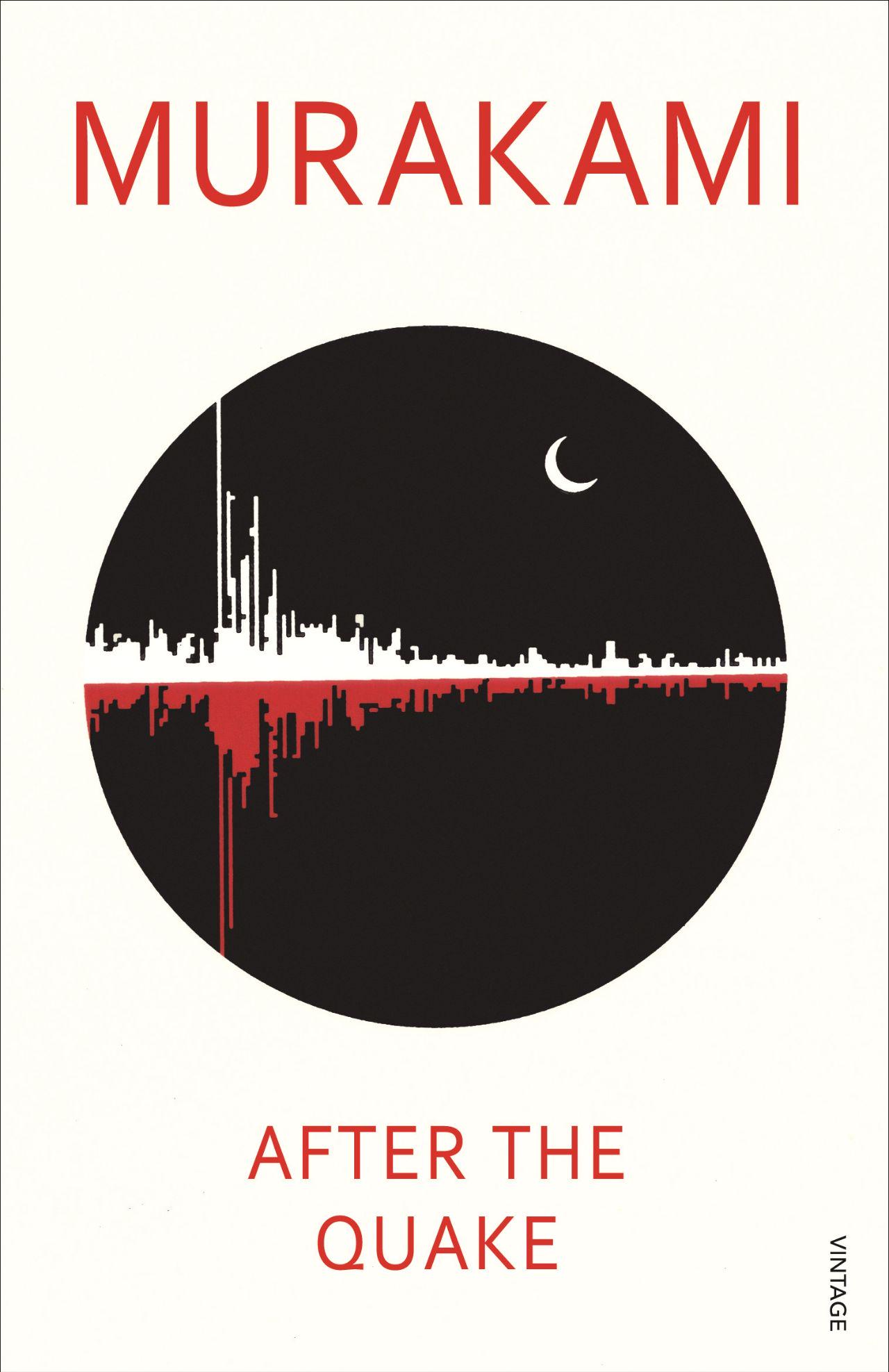 Y'know. I've decided that Murakami is just not for me. Between this book of short stories and the absolutely unnecessarily stretched out 1Q84, I think I can say that with absolute confidence. Sure there are aspects of Murakami's writing that I do like, like the peculiarities of his characters, even if those particular peculiarities have absolutely nothing to do with the story at hand. I absolutely love that. And I do like the magical realism vibes. His stories though, not so much.

My feeling is that his stories often start off most interestingly, but then towards the end –even the short stories– they sort of just lose steam and are thus killed. Meh.

I think its incredibly important to read authors of various cultures. There can be nothing more enriching. And I don't want my distaste for Murakami to put me off Japanese literature in general, so I'm going to have to very quickly attempt to find a substitute (or two) that is right for me. 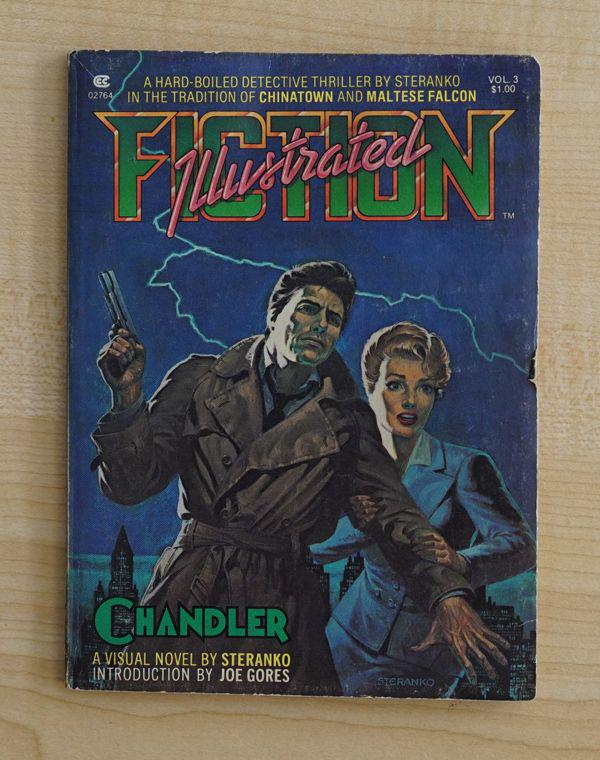 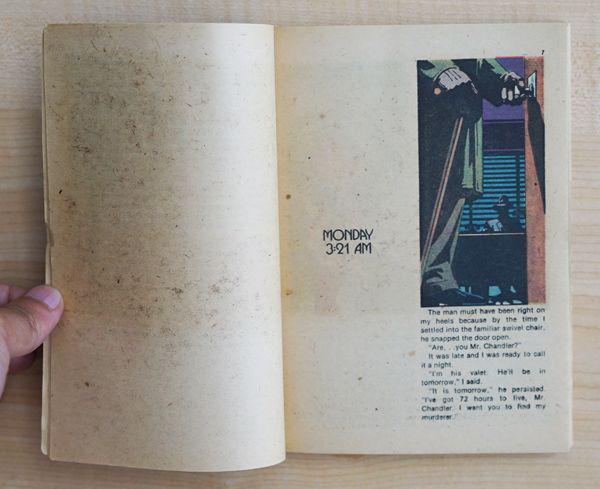 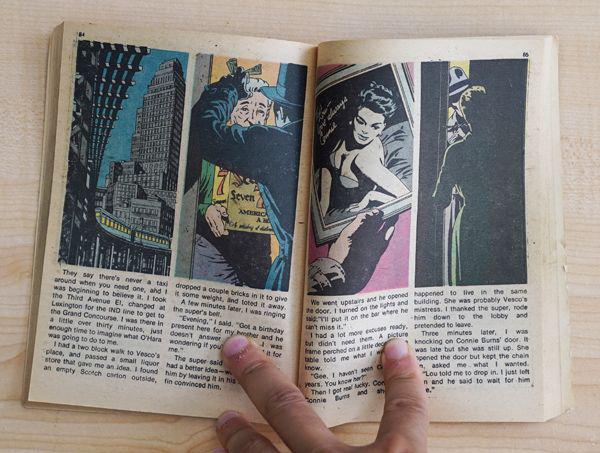 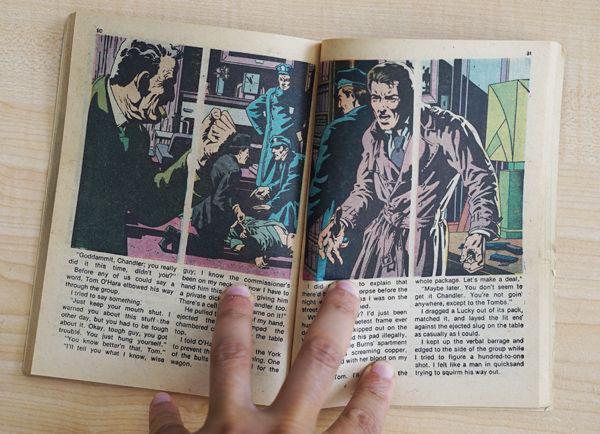 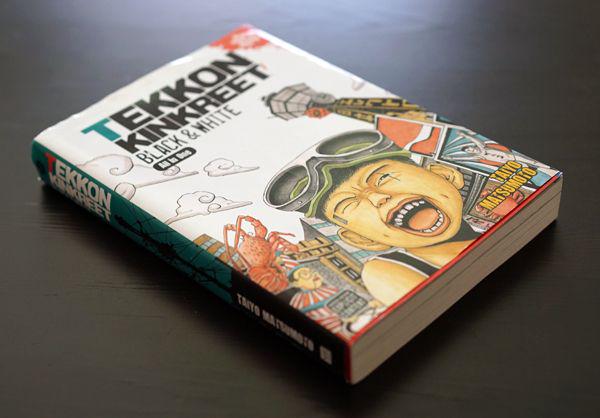 TEKKONKINKREET is kind of amazing. On first glance, it's not something I would normally pick up, but Ales Kot shoved it my face for my birthday, and my psyche is all the better for it. Manga can be weird, but TEKKONKINKREET is weird even by manga's standards. It doesn't adhere to any industry criteria, neither in terms of story or art. It feels very, shall we say, indie, very ziney, but 600 pages of ziney art and story rather than the handful of pages we're used to from most zines. It's Japan's answer to the underground comix of 60's-70's America. 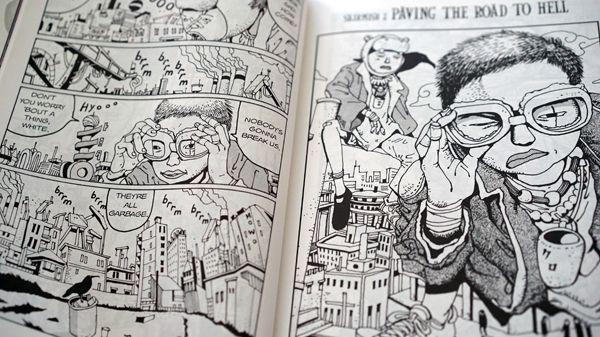 The line-art is somewhat wobbly, and feels like Matsumoto took a ballpoint pen directly to the paper, sans penciling or any kind pre-planning. This may seem somewhat off-putting at first, but after a couple of pages, it really grows on you and clings to your heart and becomes an inseparable part of TEKKONKINKREET's charm. If I were to reveal the plot to you, you would automatically decree that its a story that should take no more than 150 pages tops, but part of the reason it takes 600 is that Matsumoto allows certain moments to breathe. Something that would take no more than 2 panels in your average Western comicbook, Matsumoto uses an entire page of 7 panels for. This allows certain moments to sink in, be felt, and really helps put you in the story's setting.

TEKKONKINKREET is definitely an outlier, where common wisdom would dictate it should not really exist. If it were pitched, no one would publish it. It's a whimsical, pure, unfiltered passionate output that can only exist in this world by the sheer persistence of its creator, and as such is one of the most inspiring and fulfilling graphic novels you will ever read. Nothing will make you want to make comix –or anything for that matter– quite like TEKKONKINKREET will. 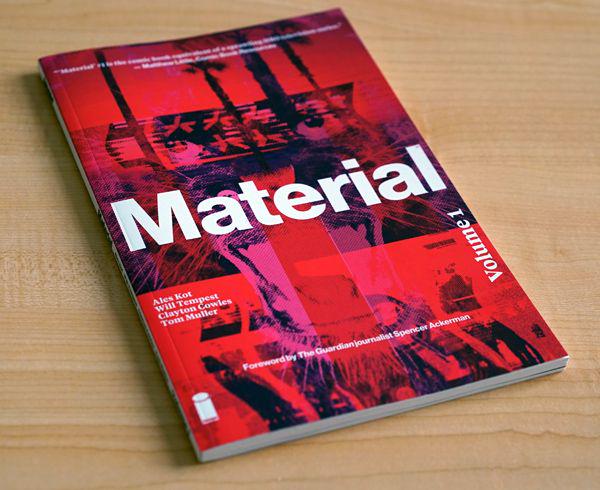 Excellent comicbook for people who don't read comics. It's Kot's soapbox book, in the way that PROMETHEA was Alan Moore's and much of TRANSMETROPOLITAN was Warren Ellis'.

MATERIAL, Vol. 1 is different in that rather than follow one main character, it follows four: a former Guantanamo inmate, an actress, a protestor, and a philosophy professor. Their stories are not in anyway intertwined nor do they intersect at any point, but exist as parallels, and I quite like that. While each of our four characters leads a completely different life, what they share in common is perhaps this: something new is introduced in their lives. Whether that new thing is a positive influence or not entirely depends on what they do with it.

Upon first glance, Will Tempest's art may come off as rather weak, especially especially If you've become overly accustomed to Marvel/DC fare. Not unlike attempting to derive the flavors of a simple Italian oregano/olive oil dish of some kind after eating a deep fried chicken doused in barbecue sauce. Almost impossible. But Will Tempest's art is really really good for the purpose of MATERIAL and I love that he's taking his color cues from the principles of graphic design rather than animation or cgi. It's cleanliness and clarity is a breath of fresh air what with the mess that is mainstream comics now.

There ought to be more “soapbox comics”, because the medium is so right for it. And if you think about it: the comic strip, which is the predecessor of the comicbook, is entirely a soapbox affair. The whole idea behind the strip is for artists to use cartoon characters as vessels for their thoughts and frustrations on a daily basis. Why that approach is virtually absent from the comicbook, I think, has much to do with publishers trying to act too much like TV producers: relying on synopses and treatments and anything else that will turn a story into a stiff unrisky mathematical equation. An environment that PEANUTS, CALVIN & HOBBES, AND LITTLE NEMO IN SLUMBERLAND can simply never thrive in. And you can bet that neither Ellis nor Moore would've been able to publish TRANSMET or PROMETHEA had they not already been household names. Although with Moore, PROMOTHEA started out as a superhero book, but turned into something else along the way, as per the Shaman's own testimony.

Kudos to IMAGE COMICS for growing the balls to publish MATERIAL, a book that relates to people not yet part of the company's usual readership. Now if there was only a way to get it on shelves outside of comicbook shops.