The Age of Darkness 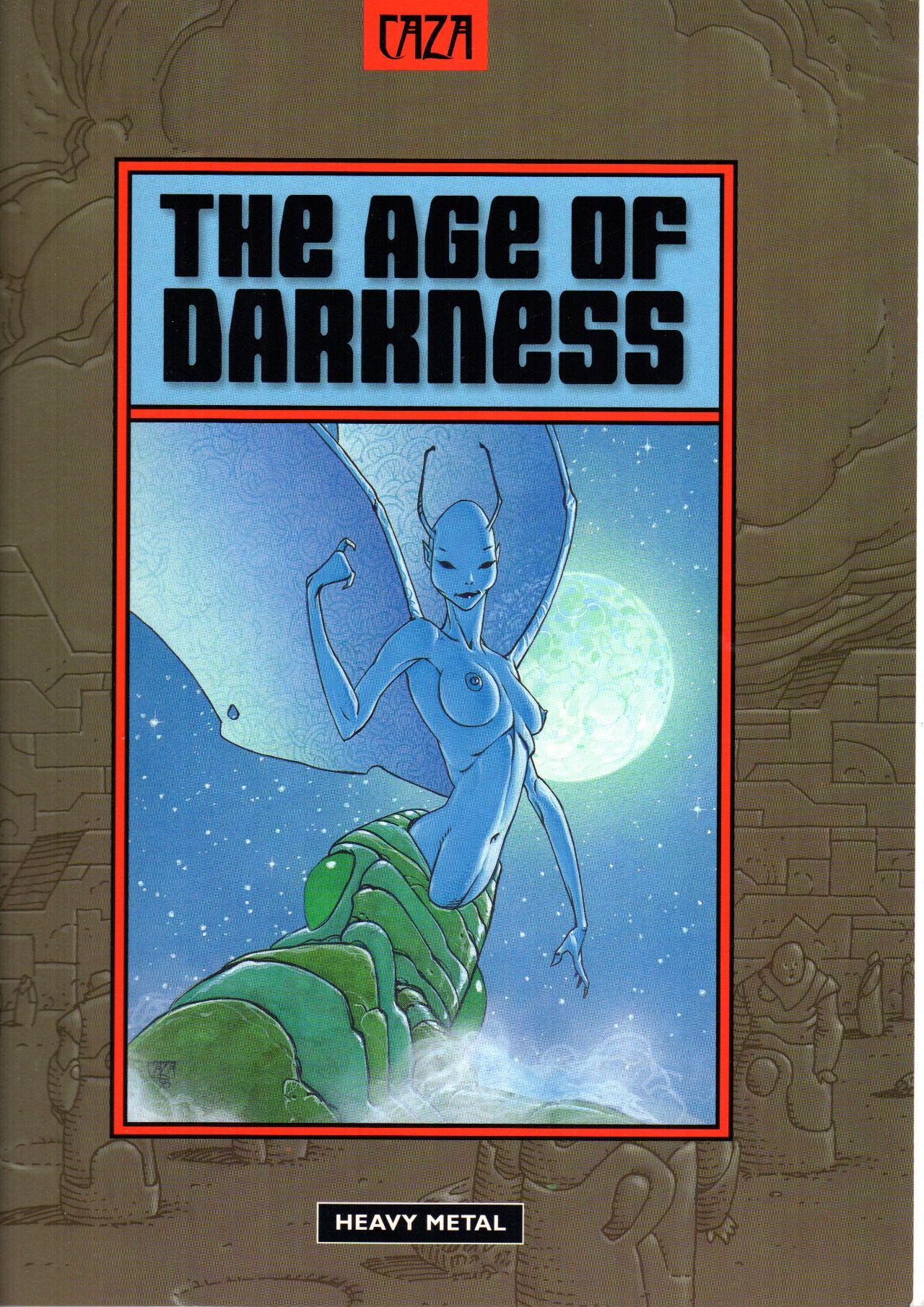 My awareness of Caza largely pertains to his cover-art for various French science fiction publications, specifically periodicals such as FICTION and GALAXIE. Proving my ignorance of much of the comix landscape, I had absolutely no idea that he did comix as well, so it was with utter excitement and glee that I discovered Heavy Metal had not only published a translated collection of his works, but that their website had it on sale (for as low as $5.12 at the time of purchase, cover price $12.95)!

Caza's line art is clearly the demented lovechild of Moebius and Druillet, an exceptional combination. His color work I would argue surpasses both, bringing forth a quality that is at once painterly as well as designy; with gradients used minimally (and traditionally) in conjunction with flats within a color palette that rarely exceeds a handful of hues. This, together with his incredibly considered compositions make each and every page within this tome worthy of its own poster. Such a statement in my mind would mean the end result probably wouldn't bode well for sequential storytelling (something say, Sergio Toppi—who I love— is often guilty of), but THE AGE OF DARKNESS is evidence that Caza may be the shining exception to the rule. 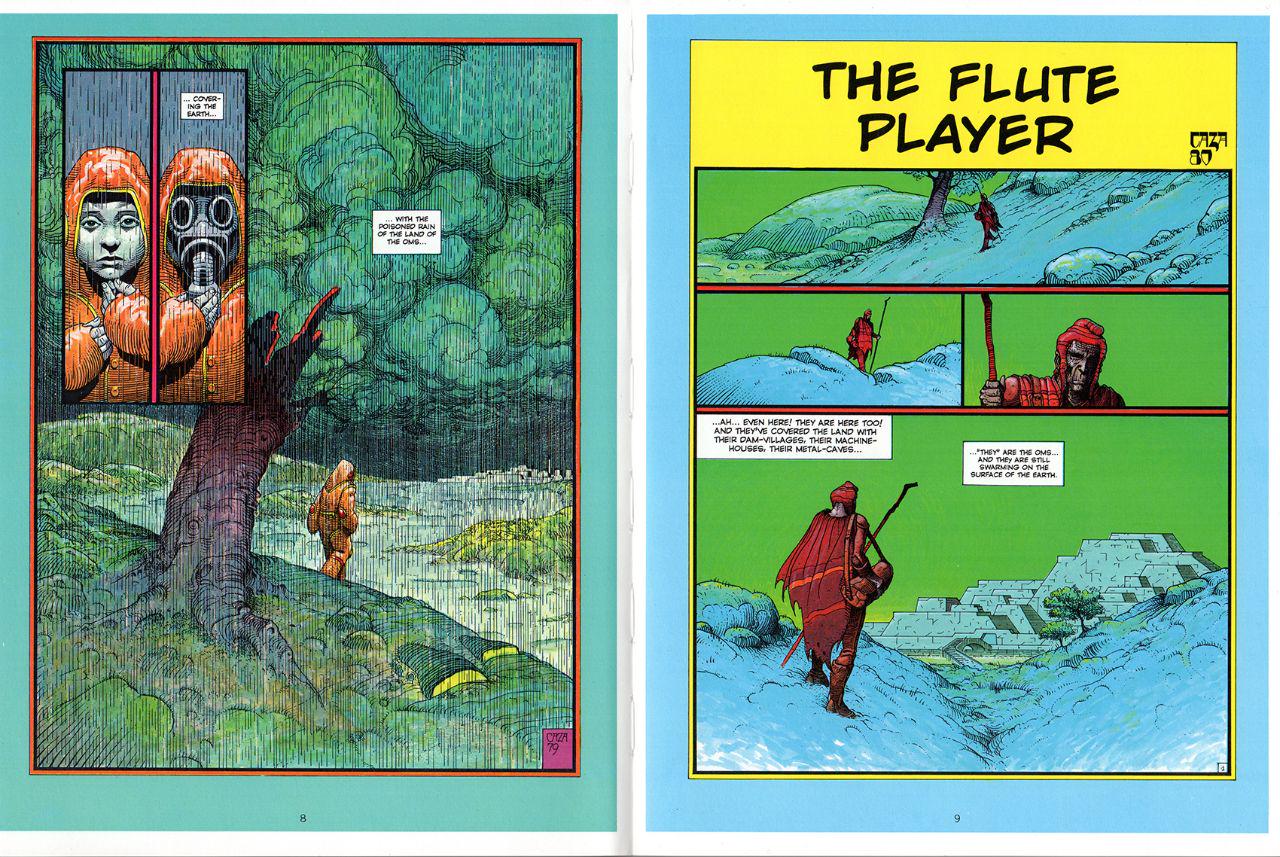 The stories in THE AGE OF DARKNESS are surreal and suggestive rather than plot or character driven. Dialogue is rarely spoken, and instead panels are accompanied by poetic prose (but also sometimes by rather redundant descriptions of what you're already looking at). 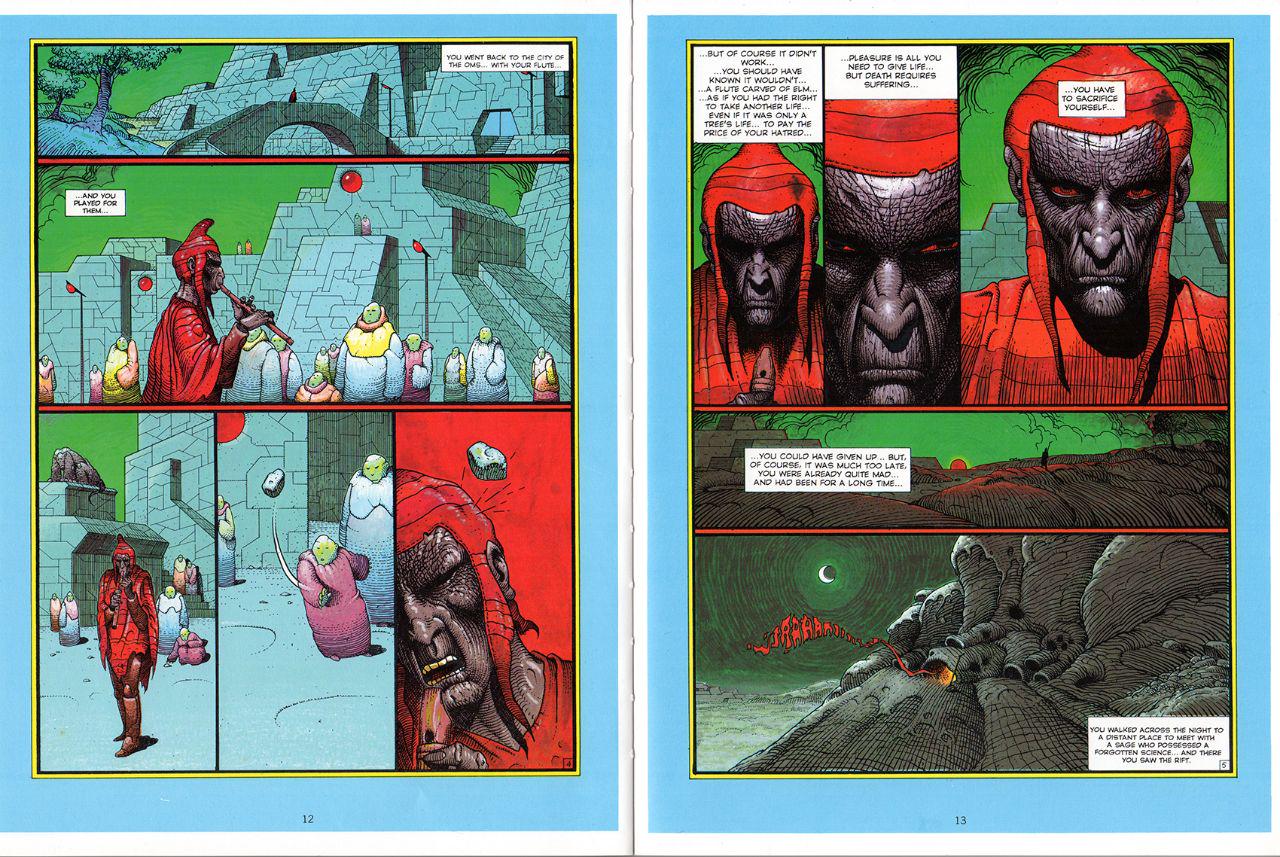 The opening story, “Clouds”, is the least weird in the collection. This 4-pager dated 1979 gave me a tinge of my own THE SOLAR GRID (or more accurately the other way around); a child contemplating a sky thick with elaborate clouds is interrupted by rain, prompting him to don his protective suit, because—as it turns out—the rain is acidic and poisonous. The second story, “The Flute Player” dated a mere year after the first, is a grand leap into weird. A wandering man passes through the great metallic city of the “Oms” before settling on its outskirts and carving a flute out of a lonesome bush. Upon playing it, he is attacked by the Oms and driven out of the city. He returns and plays his flute again, but this time... the Oms are driven to mass suicide, and the closing panel reveals that the flute is different, that this time... it is fashioned out of bone.

Bone from the wanderer's own leg. 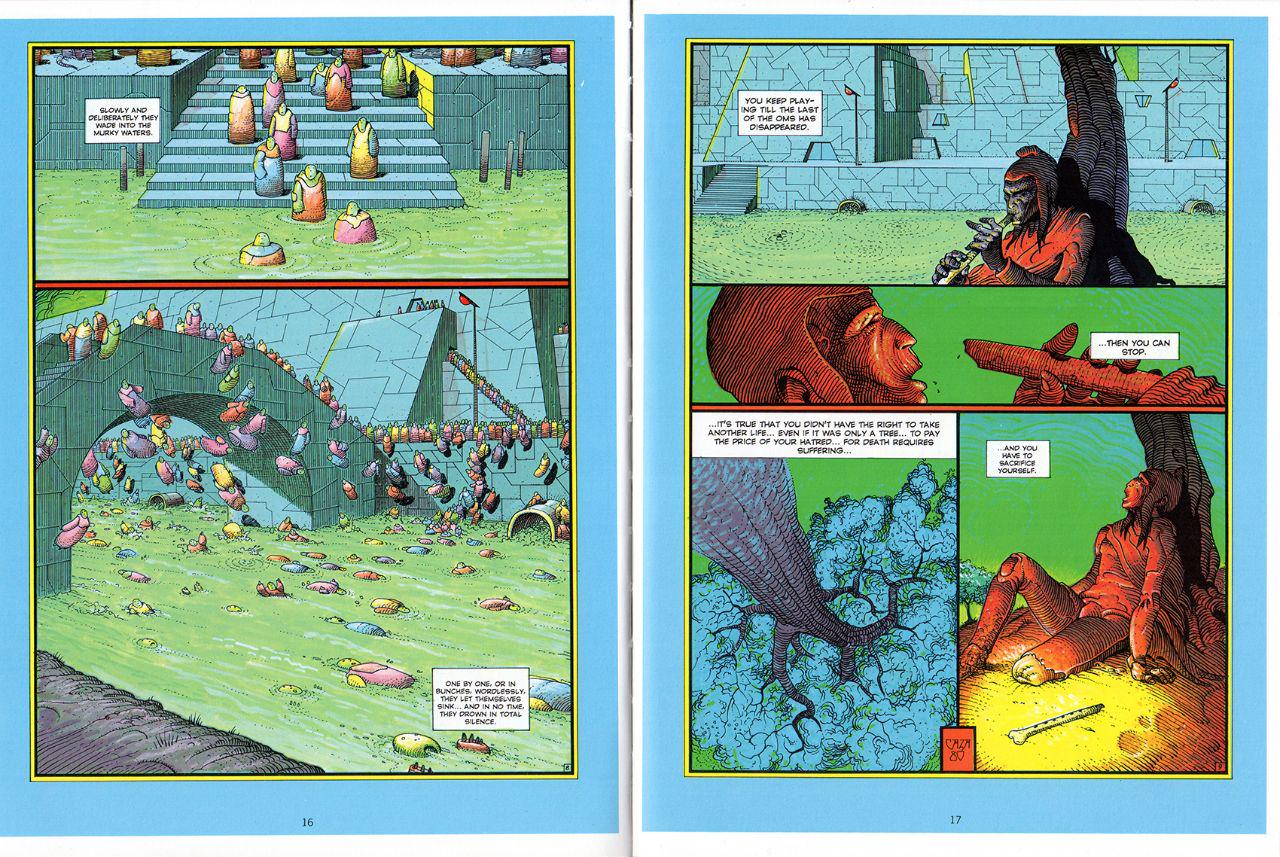 And the stories only get weirder. They tend to follow a similar structure though, where there's a buildup to a final panel reveal. These don't offer any concrete statements or notions (not that they don't intend to) but rather they put you in a contemplative state of mind, a space that is part philosophical and part dream-logic. 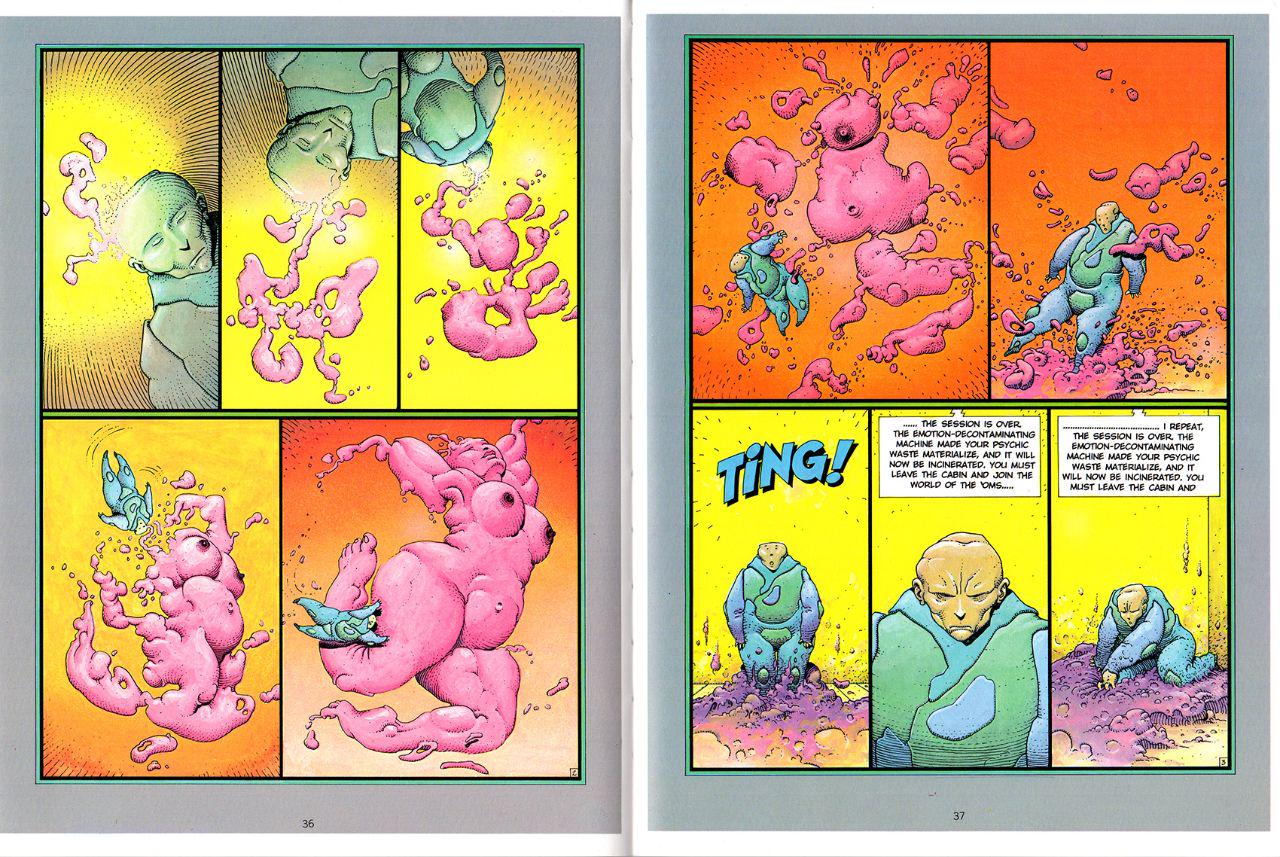 Beautiful, timeless little think-pieces that you can just pick up at any point in your day and instantly induce your life with a little beauty and thoughtfulness (and quite often some wicked disturbance). 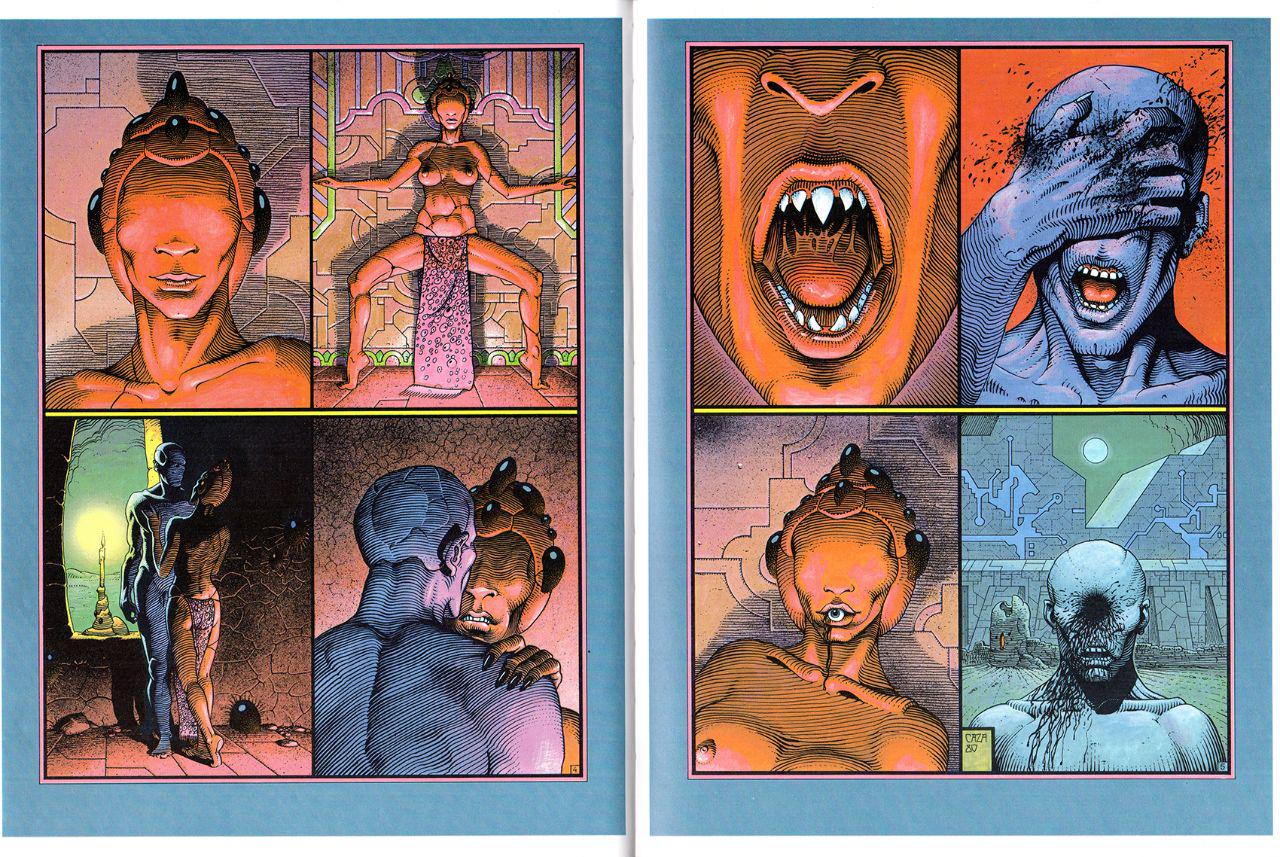