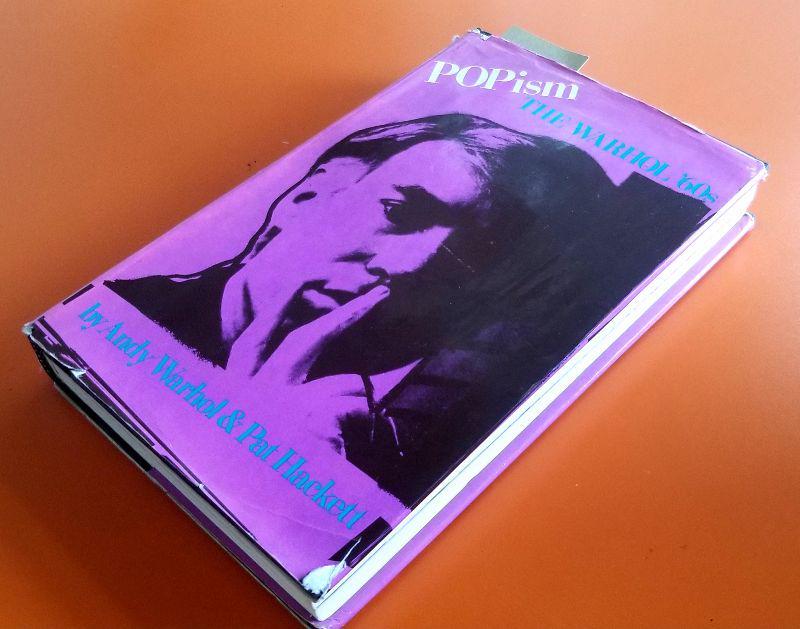 In most of his interviews, Andy Warhol wasn't very talkative and came off as hella awkward while simultaneously being kinda snarky, often dicking interviewers around. So it's quite refreshing to be getting his take on things in his own voice. 300 pages of it, no less. Sure, you can bet the actual writing was done by Pat Hacket, but you can be equally sure that the voice behind the writing belongs to no one but Andy Warhol.

“Very few people on the [West] Coast knew or cared about contemporary art, and the press for my show wasn't too good. I always have a laugh, though, when I think of how Hollywood called Pop Art a put-on! Hollywood?? I mean, when you look at the kind of movies they were making then—those were supposed to be real??”

It's also nice to see him recount his transition from his commercial art practice to his early beginning within the gallery circuit— when he was still not quite sure of himself— before he became a superstar and way before his studio became the go-to place for every major counter-cultural figure in America.

“By the time Ivan [Karp] (who worked at Leo Castelli Gallery) introduced me to Henry [Geldzahler] (who at the time was a new young 'curatorial-assistant-with-no-specific-duties' at the Met) I was keeping my commercial drawings absolutely buried in another part of the house because one of the people Ivan had brought by before had remembered me from my commercial art days and asked to see some drawings. As soon as I showed them to him, his whole attitude toward me changed. I could actually see him changing his mind about my paintings, so from then on I decided to have a firm no-show policy about the drawings. Even with Henry, it was a couple of months before I was secure enough about his mentality to show them to him.”

But if it's the explosive Factory years you're interested in, rest assured there's plenty of that as well. One of the best things about this book though is Warhol's observations about the times. Because that is very much what the book is: a window onto the 1960's through they eyes and words of Andy Warhol. It starts off in 1960 and ends in 1969. By all accounts the 60's was a very special decade in America, and Warhol's retelling definitely drives the point home

“Generally speaking, girls were still pretty chubby, but with the new slim clothes coming in, they all went on diets. This was the first year I can remember seeing loads of people drink low-calorie sodas.”

“Since diet pills are made out of amphetamine, that was one reason speed was as popular with Society as it was with street people. And these Society women would pass out the pills to the whole family, too—to their sons and daughters to help them lose weight, and to their husbands to help them work harder and stay out later. There were so many people from every level on amphetamine, and although it sounds strange, I think a lot of it was because of the new fashions.”

So you get interesting anecdotes like that, with associations and theories only someone like Warhol would come up with; Fashion made Speed popular.

He does go on tangents throughout the book, recounting other people's stories instead of his own—which I s'pose you can say is a very Warholian thing to do, isn't it? I can imagine some people getting tired of these long tangents, but I find them to be wonderful additions to Warhol's montage of the decade.

”'I gave Bob Dylan a book of my poems a couple of years ago,' Taylor [Mead] said, 'right after the first time I saw him perform. I thought he was a great poet and I told him so... And now', Taylor started to laugh, 'now when he's a big sensation and everything, he asked me for a free copy of my second book. I said 'but you're rich now—you can afford to buy it!' And he said, 'But I only get paid quarterly.'”

These asides cover a huge roster of characters, from Dylan to Jackson Pollock to Robert Rauschenberg to Jonas Mekas to Dennis Hopper to Edie Sedgwick to Jim Morrison to Lou Reed to Nico to Mick Jagger and on and on. The tone is very conversational and often gosspiy, but it isn't all mere gossip. You learn, for example, how Warhol introduced Henry Geldzahler to a young British painter by the name of David Hockney. This was before Geldzahler became curator of American Art at the Met and way before he became Commissioner of Cultural Affairs for New York City. And it was really before Andy Warhol himself became anything close to a cult figure, which he would start to become only 1-2 years later.

Hard to imagine the transition when you take into account the initial reception towards his work:

“When Ivan brought Leo Castelli up to my studio, the place was a mass, with the big canvases strewn around the living room—painting was a lot messier than drawing. Leo looked my stuff over, the Dick Tracys and the Nose Jobs in particular, and then said, 'Well, it's unfortunate, the timing, because I just took on Roy Lichtenstein, and the two of you in the same gallery would collide.”

“Henry Geldzahler was also pounding the pavements for me. He offered me to Sidney Janis, who refused. He begged Robert Elkon. He approached Eleanor Ward, who seemed interested but said she didn't have room. Nobody, but nobody, would take me.”

Amidst the stories, the gossip, and observations, there's also the occasional tip.

“To be successful as an artist, you have to have your work shown in a good gallery for the same reason that, say, Dior never sold his originals from a counter in Woolworth's. It's a matter of marketing, among other things. If a guy has, say, a few thousand dollars to spend on a painting, he doesn't wander along the street till he sees something lying around that 'amuses' him. He wants to buy something that's going to go up and up in value, and the only way that can happen is with a good gallery, one that looks out for the artist, promotes him, and sees to it that his work is shown in the right way to the right people.”

He finally got his first New York show in the fall of '62 at Eleanor Ward's Stable Gallery (only 3 years before announcing his retirement from painting). By early '63 he'd moved his work studio from his home to an old firehouse on East 87th st, and soon thereafter he hired Gerard Malanga as his assistant, who was also instrumental in keeping Andy plugged into all the cultural happenings.

“Gerard kept up with every arty event and movement in the city—all the things that sent out fliers or advertised in the Voice. He took me to a lot of dank, musty basements where plays were put on, movies screened, poetry read—he was an influence on me in that way.”

The more things Warhol was exposed to, the more he soaked up stuff like a sponge, not just for his art, but for his very persona.

“In those days I didn't have a real fashion look yet... Eventually I picked up some style from Wynn [Chamberlain] , who was one of the first to go in for the S & M leather look.”

Perhaps some of the most interesting parts in the book is when Warhol recounts some of his efforts in film, which indeed took up the majority of the 60's despite not “bringing home the bacon” in the same way the paintings did. Even today Andy's films have yet to occupy the same place his paintings have, but in reading his retelling it's hard to think that even the most skeptical of skeptics wouldn't be able to see that there's at least a bit of genius in them. In one bit, Warhol even talks about “slow cinema” something that seems to be regaining popularity in recent years.

“That had always fascinated me, the way people could sit by a window or on a porch all day and look out and never be bored, but then if they went to a movie or a play, they suddenly objected to being bored. I always felt that a very slow film could be just as interesting as a porch-sit if you thought about it the same way.” But all in all the greatest thing about the book is that it's such a perceptive account of some of the most interesting aspects of 60's New York. There's lots on Jonas Mekas' Cinematheque, plenty on the changing neighborhoods, how the East Village was becoming all Bohemian, when the Beatles became all the rage and the Stones were having publicity issues, how fashions were quickly evolving year after year (“The masses wanted to look non-conformist, so that meant the non-conformity had to be mass-manufactured”).

I find it quite odd that in the wide array of art-related books recommended to me over the years, Andy Warhol's Popism was never mentioned once. In fact, I never even knew of the book's existence, and just happened upon it by sheer coincidence. It strikes me as essential reading to anyone interested in not just Andy Warhol, but New York's art scene in the 60's more generally, arguably the most important decade in American art and culture at large. And actually, art aside, it's an incredible telling account of the decade more generally, with Warhol's keen observations on things like fashion, music, and media. Even with Warhol's shortcomings—his obsessions with things like glamour, fame, and money, all things that come across in this here book—he still manages to do what he's always done best: hold up a mirror right in America's face.