The Best of Milligan & McCarthy 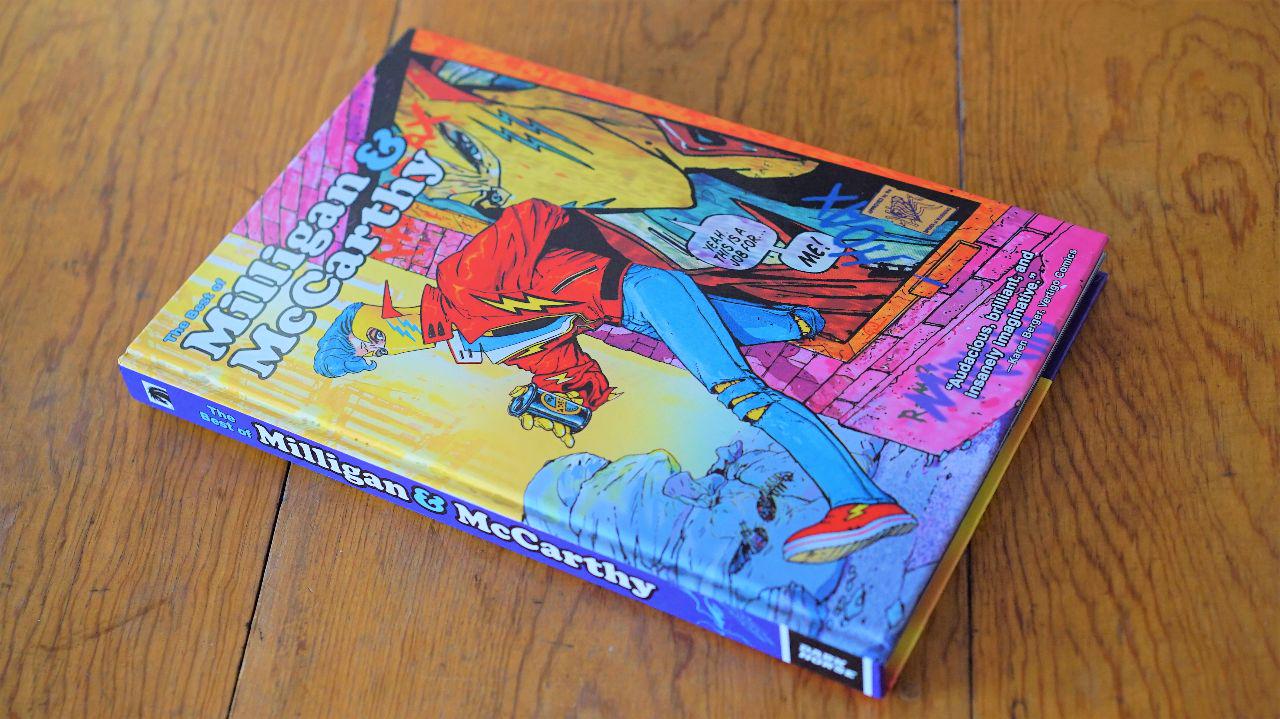 I must admit that before MAD MAX: FURY ROAD, I hadn't even heard of Brendan McCarthy, which is a damn inexcusable shame. But to be fair, the work of Milligan & McCarthy hasn’t really been part of the dialogue in comix culture. Not even when it comes to talking about the impactful indie work that fell outside of the mainstream; you never hear their work cited alongside that of Frank Miller's SIN CITY (which, before the 2005 film release was only really known in pretty small circles throughout the 1990's) or Eddie Campbell's ALEC or Dave Sim's CEREBUS. But that silence is in no way reflective of the duo's influence.

About a year ago, I listened to an interview with Neil Gaiman for the British Library podcast focused primarily on the RAMAYANA and Gaiman's involvement in adapting it for DreamWorks. When asked if he had a particular style in mind when working on the various [never-produced] treatments, Gaiman was quick to point out Brendan McCarthy's work on ROGAN GOSH, which Gaiman describes as being birthed from Brendan's “Road to Damascus moment, where he ran into a pile of comics in India, and just went 'I love this, there's art stuff here that I've never seen in the West,' and started doing stuff and playing with it.” He also goes on to describe ROGAN GOSH as “one of the most interesting moments of fusion between Indian and British and American comix culture.”

Naturally, I immediately looked into getting my hands on some ROGAN GOSH and discovered that it was reprinted in the pages of an over-sized hardcover titled THE BEST OF MILLIGAN & MCCARTHY published by Dark Horse Books in 2013 and retailing for only $24.99 (down to $7.19 as I type this). Although a horrendously produced edition (pages are actually falling out in less than a year since purchasing it), I'm still happy to have gotten my hands on it because it has been blowing my mind ever since. Not least because of the work itself, but because it simultaneously exposes a very vital almost secret history of comix lost to... I dunno,an obsession with the founding of Image Comics and the less than negligible work its founders produced? If there was ever a demented, revolutionary punk rock duo in comix, Milligan & McCarthy definitely fit the bill. ROGAN GOSH first appeared in REVOLVER, a short-lived anthology magazine for mature readers published in the UK between 1990-1991. GOSH was finally collected by DC Comics/Vertigo into a 48-page one shot in 1994. It is perhaps because of the book's modest page-count that it is never mentioned in the same breath as say THE SANDMAN or PREACHER, or THE INVISIBLES or other long-running titles central to the Vertigo imprint's identity. But hey, Aristotle's POETICS is no more than a sodding 44 pages, which is sometimes all you need to jump-start a revolution.

In Milligan and McCarthy's own words, surrounded by “long and bloated 'concept album' comics”, they were more interested in “the short, sharp, throwaway pop single. The type you danced to. The type you had sex to.”

While the above statement can most be applied to their series PARADAX (also featured in the book), it pretty much hits the nail on the head with the majority of their collaborations, including ROGAN GOSH. 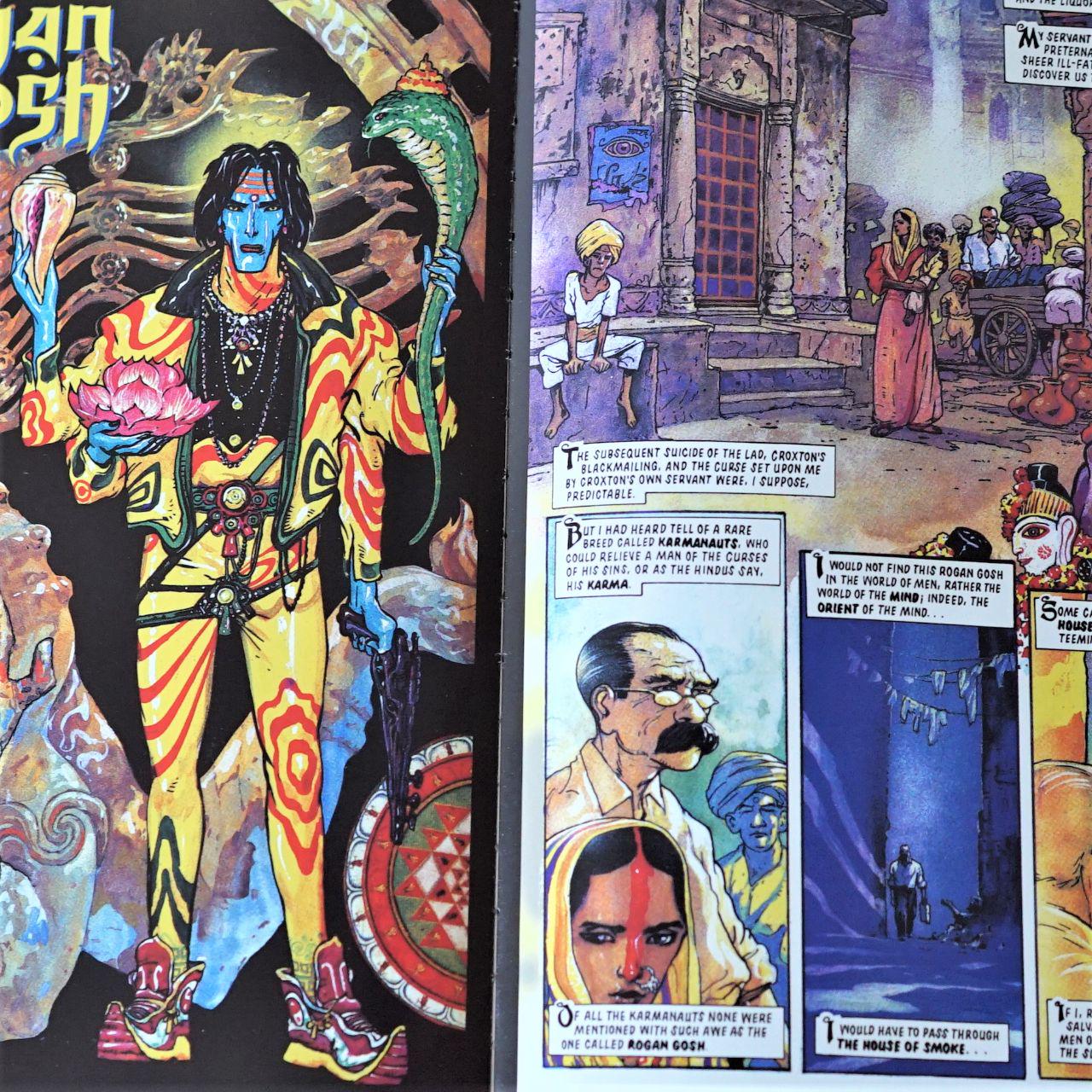 By the duo's own admission, it is not only difficult to describe what ROGAN GOSH is about, it is even pointless to ask. What may have been originally conceived as a “sci-fi Bollywood BLADE RUNNER” rapidly evolved into something far more demented. It starts off with Rudyard Kipling in Lahore en route to a place “where men of all castes come to sleep the sleep of dreams.” Essentially, an opium den where “karmanauts can relieve a man of the curses of his sins.” If you think that opening scene will give you any idea of what follows, you are sorely mistaken. Kupling is entered into a “jasmine-scented dream of the future” where we are transported to psychadelic trip after psychadelic trip involving completely different characters:

If none of this makes the slightest bit of coherence, well that's because there is nothing coherent about it. Rather than there being any kind of train of thought, it's more like a train blown to bits upon the detonation of atomic dynamite. Shards of ideas floating around a nebula, jabbing into each other with every turn of the page. It's bizarre stuff, heavy on logic-defying captions almost as much as the explosive visuals. If you, the reader, let yourself go, you'll find that the synergy of text and image in ROGAN GOSH will drag you around a strong relentless current of spicy thought soup. Washing ashore an island of utter confusion is inevitable, but not without a sense of thrill retained from the memories of the surrealist storm that was.

Imagine a comicbook operating along the logic of say, PROMETHEA, 8 years prior to PROMETHEA's publication and without any of the rigorous explanation of the world's mechanics the way PROMETHEA delves into. Instead you're just thrown into it and left to make connections entirely on your own. That's what ROGAN GOSH feels like; a weird transcendental spell cast in comicbook form. 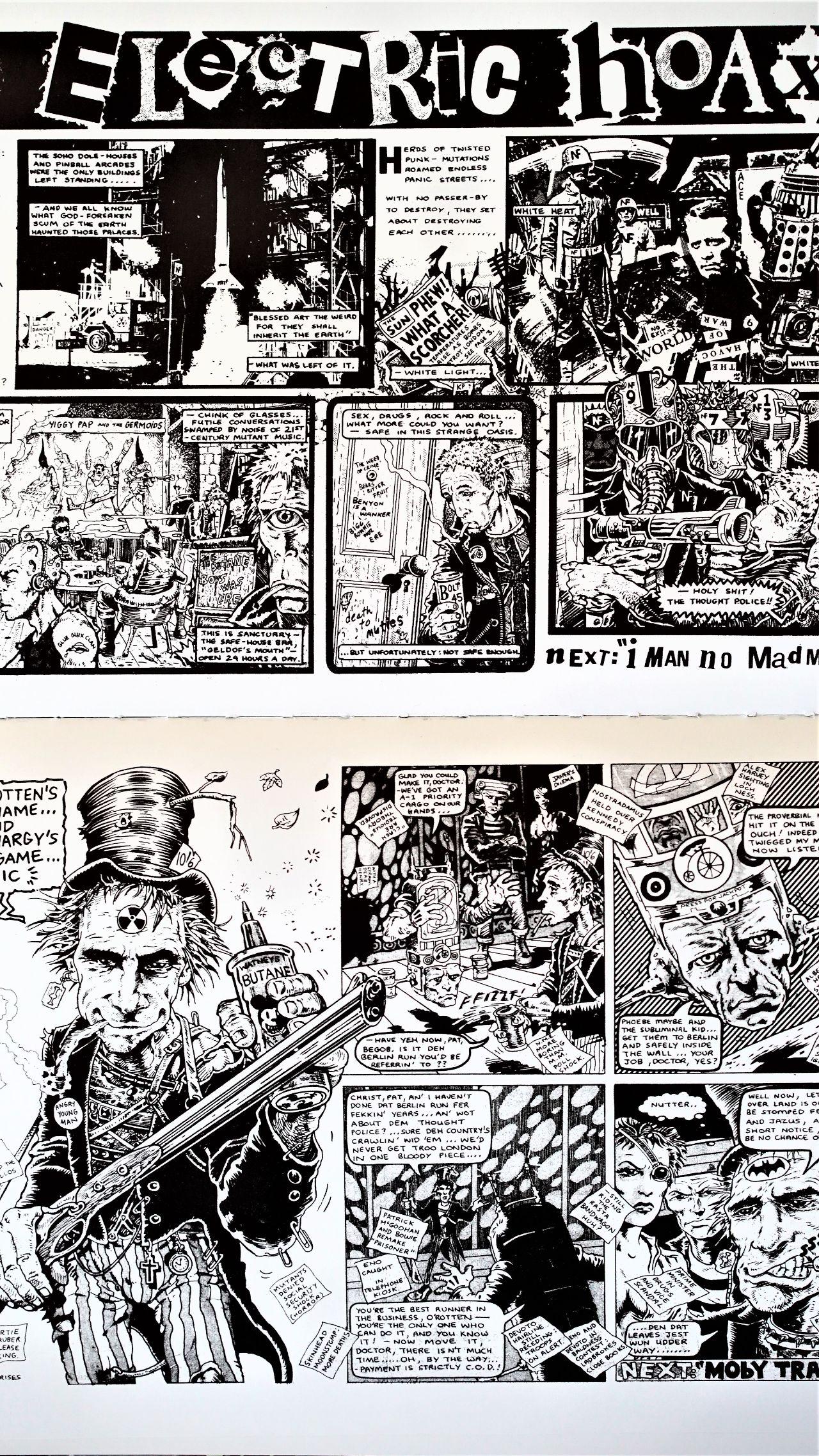 It isn't a coincidence that Milligan & McCarthy share something with Alan Moore other than British citizenship. All three after all did get their start making comix in the indie music paper SOUNDS. Moore with ROSCOE MOSCOW in 1979, and McCarthy et Milligan with THE ELECTRIC HOAX in 1978. This discovery, although new to me, was not at all surprising, as I find that I am typically drawn to creators who cut their teeth in avenues that fall outside of “the mainstream”. Where the ones “in charge” understand little about what they’re doing, where anything goes and opportunities for mad experimentalism aren't stifled.

The greatest discovery in THE BEST OF MILLIGAN & MCCARTHY for me has been the duo's work on FREAKWAVE, a comic that, by Brendan's own admission, was directly inspired by MAD MAX 2: THE ROAD WARRIOR which Brendan became obsessed with during his surfing getaway in Australia in 1981. After which Brendan coerced Milligan to co-write a “Mad Max goes surfing” treatment Brendan could pitch to Hollywood. Hollywood didn't bite, but the duo did get to produce it as a backup strip in the pages of VANGUARD ILLUSTRATED published by Pacific Comics in 1983. Pretty straight adventure story initially (well, as straight as Milligan & McCarthy can muster anyway), with the most striking aspect of the strip being character designs and world building. FREAKWAVE is a post-apocalyptic punk-rock drifter who windsurfs a flooded Earth in search of floating trash he can live off. He battles it out with disease-ridden humanoid “Water-rats” and psychopaths in gasmasks wrapped in old tin cans and the random cultural ephemera of old. FREAKWAVE would later resurface as a punk-absurdist Tibetan Book-of-the-Dead story in 1984's STRANGE DAYS, an anthology showcasing the work of Milligan, McCarthy, and Brett Ewans published by Eclipse Comics. It only ran for 3 issues, but Warren Ellis says it “landed like a hand grenade from another world”, which is still exactly what it feels like going through its contents 34 years later today. It is especially in the pages of STRANGE DAYS' feature comic FREAKWAVE that you see Brendan McCarthy and Peter Milligan really rocking out like some kind of alternative comicbook band, the pages crackling with the energetic buzz of an electric guitar. Brendan especially reaches peak McCarthiasm, with 90% of his visionary work on FURY ROAD appearing here first on the page a good 31 years before blowing people's minds on screen.

Which, by the way, how fucking cool is that? To be asked to work on the sequel to a film that inspired your scarcely read comicbook. And to be asked specifically because of your work on said comicbook? Not to mention that FREAKWAVE, although given a pass by executives in Hollywood, very likely influenced the movie WATERWORLD in 1995, at the very least in terms of look and production design, which let's face it was the only really good thing about the film.

Nothing will give you that good kick in the balls to go off and make comix (or any ill-advised pursuit) more than looking at the work of Milligan and McCarthy. If a big part of the draw of comix for you is that it is medium void of filters between creator and reader, well then that cannot be more true of Milligan and McCarthy's collaborations. Because there are always editors keeping creators in check, or heck, even self-inflicted inhibition on the creator’s part. Not for Milligan and McCarthy.

Never for Milligan and McCarthy.