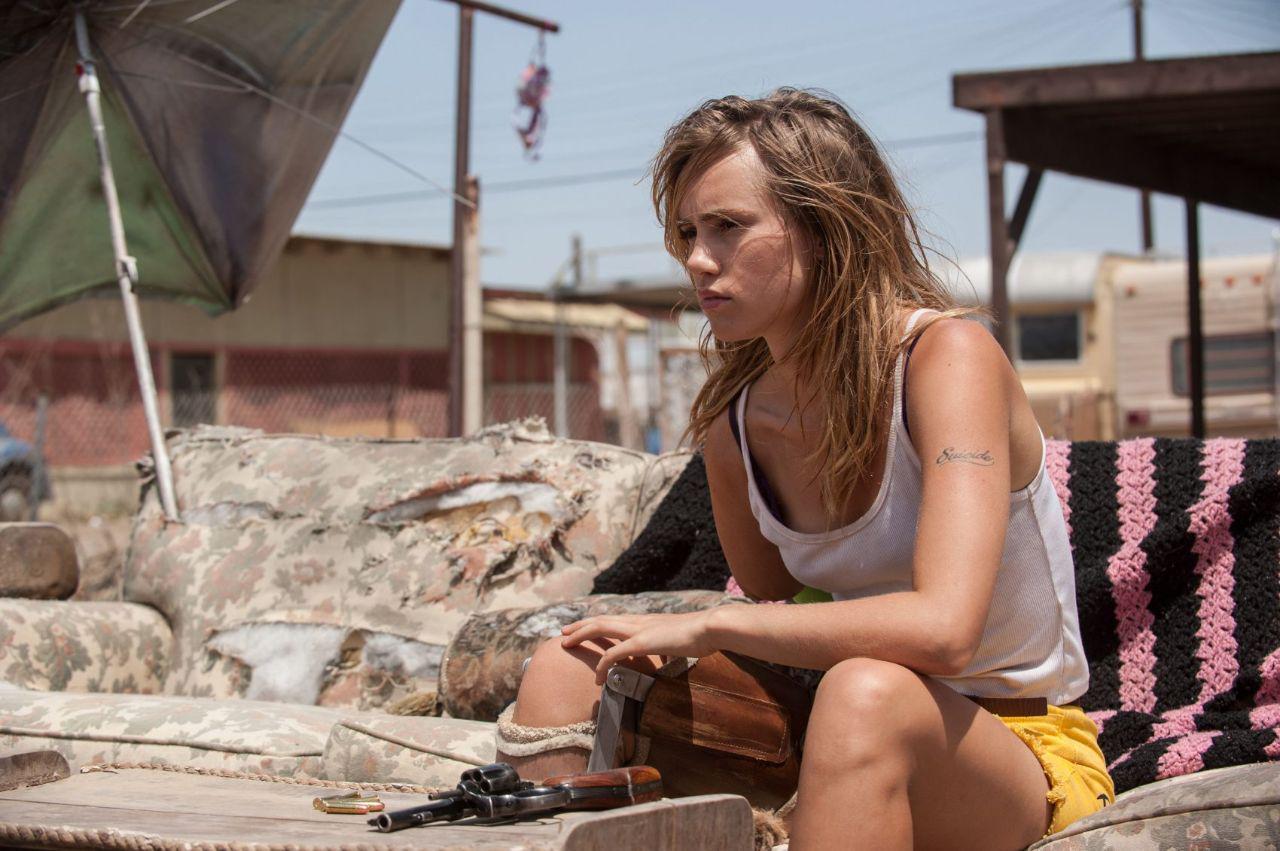 This is one fucking weird movie, but I actually really liked it and I'm not sure why. Logically speaking, I really shouldn't like it. I mean, there's hardly a likable character in the entire thing. What little dialogue is in it is actually really slow and kind of off and pointless. But it stays with you long after you're done watching it. Or at least it has with me.

A 20-something year old girl is dropped off by the police at a fenced off desert, where she is hunted down by cannibals. She manages to escape and make it to a self-sufficient community called Comfort, where besides having drugged out raves, inhabitants grow their own vegetables and raise bunnies. Up to here, the movie has you gripped by the balls and is pretty fucking flawless. But after that the story zigzags into these completely irrational directions and, despite being really slow and moody (appropriate for the desert setting), it all ends abruptly on a whatever sorta note.

So: I can see why so many people really fucking despise this movie, including the two friends I saw it with.

But: This is the first time in a very long time I've walked out of a movie and actually felt like; if I could, I'd actually like to own an original print of this film. It is absolutely gorgeously shot. The post-apocalyptic set pieces in the desert are made up of the debris of our current very average world, but the assemblage is peak style and super artistic. I get that it's very easy to write the whole thing off as some kind of millennial hipster Burning Man bullshit, but you can imagine a society of white suburban John Wayne-like family men hating on Dennis Hopper's EASY RIDER for reasons not entirely dissimilar. The equivalent of the long-haired hippie biker of the 70's is probably the millennial hipster of today, who is often shat on by the generation that came before. Which is why I suppose THE BAD BATCH isn't really made for the current generation of film critiques or Rotten Tomatoes voters, hence the really poor reviews it's been getting. Its audience is likely only within the millennial crowd, who unfortunately will probably not even hear about it before the film's director, Ana Lily Amirpour, is sent to Hollywood jail and denied the privilege of directing ever again.

I'm hoping that won't be the case though, because if anyone can make a unique film right now on a nickel-to-dime budget, it's Amirpour, as demonstrated by her previous masterpiece, A GIRL WALKS HOME ALONE AT NIGHT. I would argue that THE BAD BATCH is the EASY RIDER of this generation, but that would be selling the artistry of Ana Lily Amirpour really really short. It might be more appropriate to compare her to 70's Jodorowsy whose EL TOPO was viewed religiously in late night exploitation theaters. Indeed, if such theaters still existed to this day, you can imagine them being the perfect viewing venues for THE BAD BATCH, where a contemporary crowd of young, high 20-somethings would likely frequent regularly just to watch the picture over and over and over again (although, it might have to be annexed to a craft brewery or artistinal coffeehouse for that to work).

Amirpour has reportedly stated “I don’t make a film to tell you a message,” so if you're expecting to walk into a film that is spoon-feeding you what it's about, or where every action is supposed to have some kind of payoff as per the conventional storytelling mechanics of the Hollywood film school, then you will certainly be disappointed. We find out at a much later point in the film that this barren desert is where “the bad batch”, society's unwanted, is sent. So you find yourself assuming that maybe... these outcasts will break out and fight back? Or maybe we focus on the internal struggle within this desert prison and we have the cannibals facing off with the people of Comfort? Or maybe our heroine takes it upon herself to enact full-on revenge against the cannibals? The story never goes there though. Instead, much like the film's protagonist, you're tossed into a world that makes little sense, where people say shit that has no meaning and will lead to absolutely nothing, and you just go with it because that's actually what we do in real life most of the time.

Not that you won't come out of THE BAD BATCH with something. It's a work of art where new meaning can be derived from the whole experience as per each and every viewers own persona, where new meaning can be derived each time you watch it. It's a work of art created by someone who might've tossed a young Jodorowsky, Lynch, Tarentino, and Miller into the blender, and chugged that shit down right before marching on set and declaring ACTION!

The soundtrack is also killer (way better than BABY DRIVER's, by the way), and I am very much eager to give it a listen on vinyl.