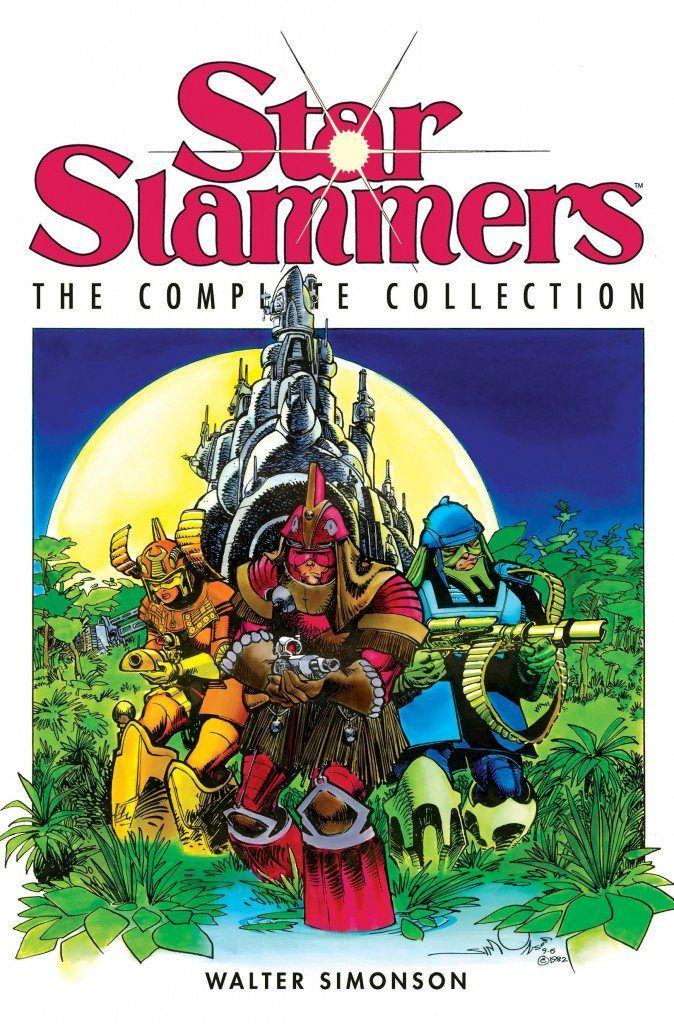 Warren Ellis insisted I read this after noticing stylistic similarities in my work on THE SOLAR GRID. I'll admit, this isn't something I would've necessarily been attracted to, not at first glance, as I tend to lean more towards science fiction that has its roots more in science rather than fantasy, but it only took me the first few pages to understand why Warren would recommend this. STAR SLAMMERS is a masterclass in comicbook storytelling.

Now, for the B-movie aficionados, it might disappoint you to know that this has nothing whatsoever to do with the movie STAR SLAMMER: THE ESCAPE (previously released as PRISON SHIP), but I guarantee you it is much better.

It blows my mind that this is Simonsons' first ever comix work, because it has all the hallmarks of a seasoned professional, one who knows the medium like the back of his hand. Although, with enough enthusiasm for it to bend the rules from time to time and experiment with storytelling techniques. One of my favorite parts in the book is when Senator Krellik (the bad guy) asks the delegates of his planet to vote on whether or not to eradicate the Slammers, effectively an act of genocide. Monolithic holograms take form behind him, a rose for life, a skull for death. The votes are cast, and it's as if the skull awakes.

Now what's interesting is that this warmongering democracy is not brought to its knees by way of a lone warrior, but rather a collaborative tactic that requires a level of elevated spirituality. Sure, it isn't the most groundbreaking story, but it's beautiful stuff. And it feels like a full fledged movie, told almost effortlessly in just 64 pages. I find myself referring to it over and over again just to learn how to pull that off (once I bring THE SOLAR GRID to a close, I don't think I'll be able to handle a project of the same scope for quite a while).

“Genre-bending” is the new buzz word de jour, but STAR SLAMMERS, first published in the WSFA Journal in the early 70's, and later reprinted in 1983 by Marvel, has its fair share of it with elements drawn from sci-fi, fantasy, westerns, and samurai cinema. While the story will hardly blow anyone away, especially not today, the book is an exemplar manual in conscious and powerful graphic storytelling, not to mention illustration in general.

STAR SLAMMERS is available used on Amazon for as low as $0.99

In 2014, IDW released a poorly marketed re-release of STAR SLAMMERS, complete with a sequel that, once upon a time, was partially released by Malibu Comics in 1994. Based on the previews, this new collected edition seems to have been “re-mastered” with 90's era digital coloring that I just can't swallow. But do pick it up if that's more your jam.