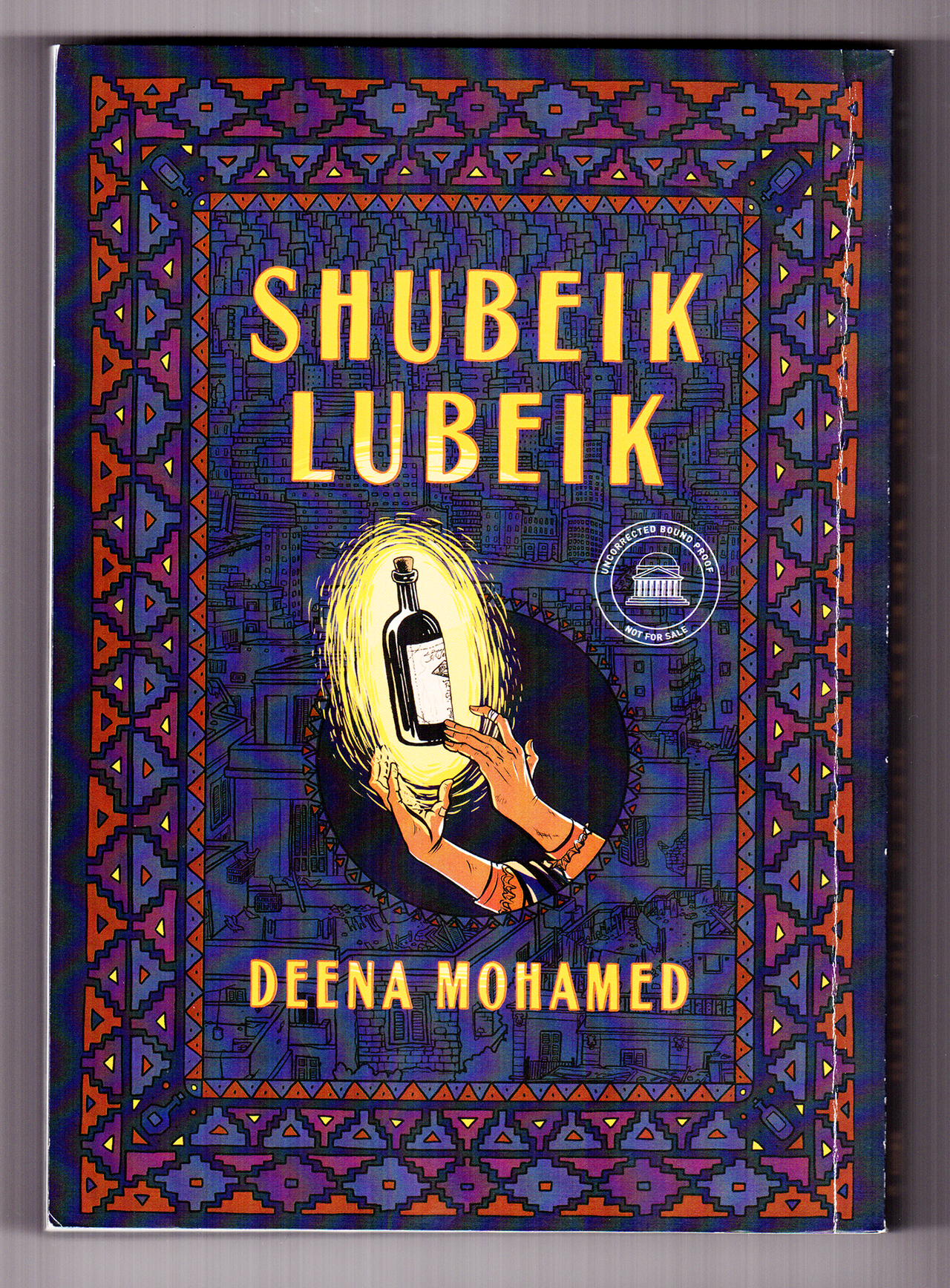 Describing it as an atomic bomb wouldn’t be quite right, because it’s far more insidious. It’s more of an inconspicuous feather, carried by the winds until it finally lands ever so softly only to cause a ripple effect of mass destruction and hysteria. Of course describing this doorstop of a book as a feather might seem out of place. At over 500 pages it is a beast of a thing, the sight of which would strike fear and envy into the heart of even the most accomplished cartoonist. The only lightweight aspect of this impressive tome is that of Deena's touch, daft and never heavy-handed.

But I'm getting ahead of myself here. What exactly is SHUBEIK LUBEIK? It is, in fact, a trilogy, forthcoming for the first time in English (read from right-to-left tho, like Manga) in a singular handsome package from Pantheon. Many might find themselves surprised to see this “debut” by a completely “unknown cartoonist” so massive and more importantly so fully-formed right out the gate, but that's only because they would be ignorant as to Deena Mohamed's track record, who released the first SHUBEIK LUBEIK in Egypt as far back as 2018, and has been steadily racking up awards since. And prior to that she spent the better part of a decade cutting her teeth on some very acclaimed webcomix. 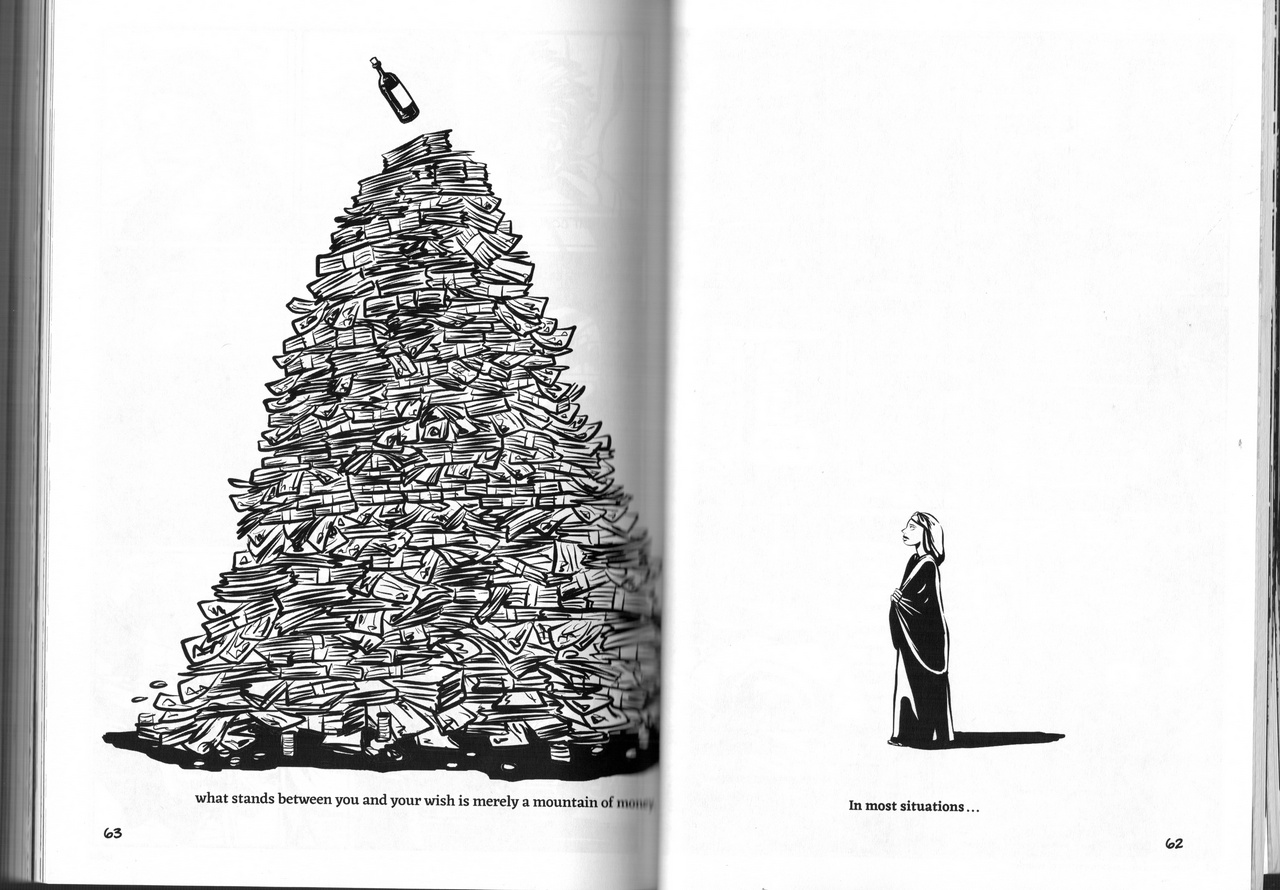 The thing is, if I were to tell you Genies and wish-making, I wouldn't be lying, but I would not in any way be doing this masterpiece justice. And that is exactly what makes this book (or this collected trilogy of books) so masterful, really. In that it is a masterclass in subversion, in gently luring the reader in with beloved singsong only to expertly smack them up the head with a solid oak bat! Which is why I'm reluctant to give too much away. I'd really love for readers to experience this the same way I did: knowing only that it's about genies and wish-making. But I know that's not much of a selling point, so I'll say this: Magical Realism. 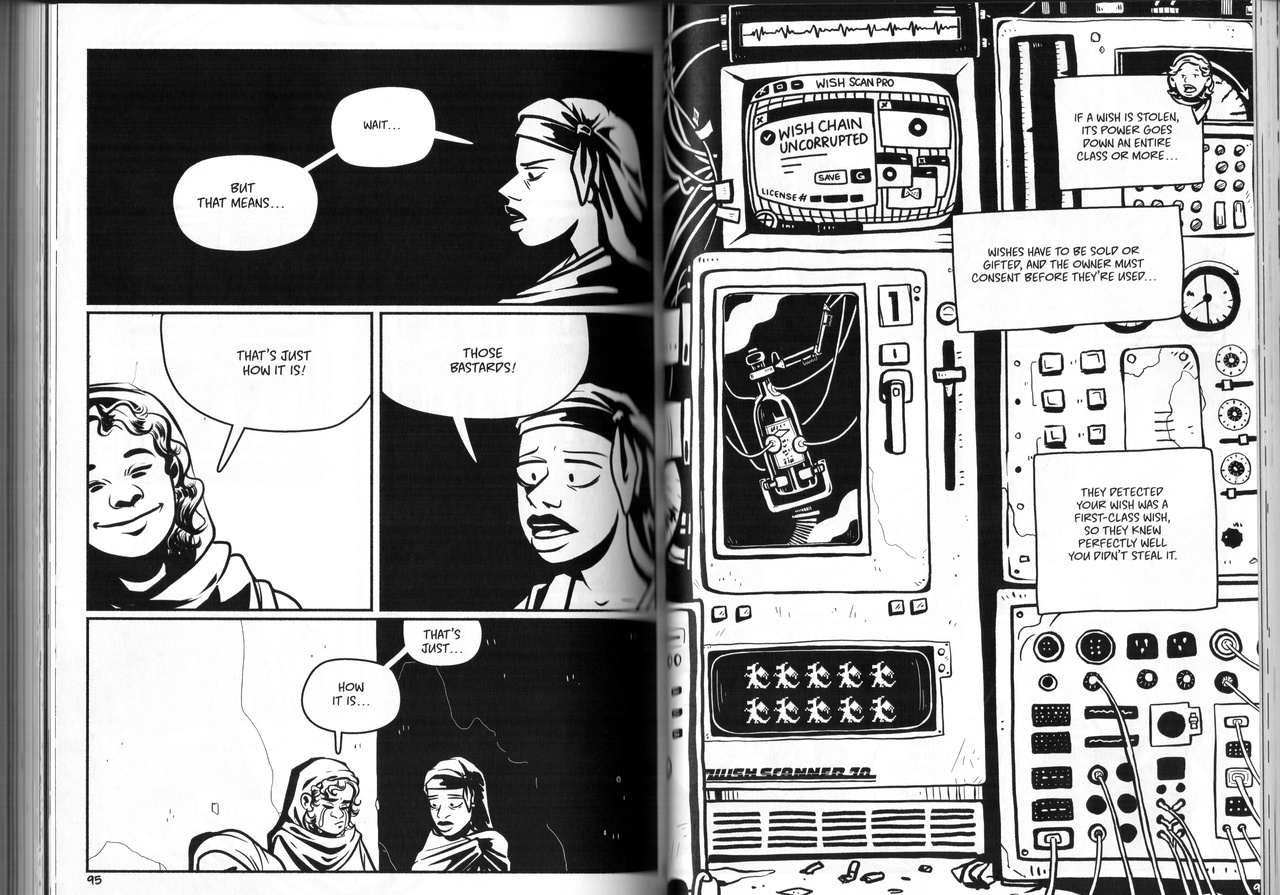 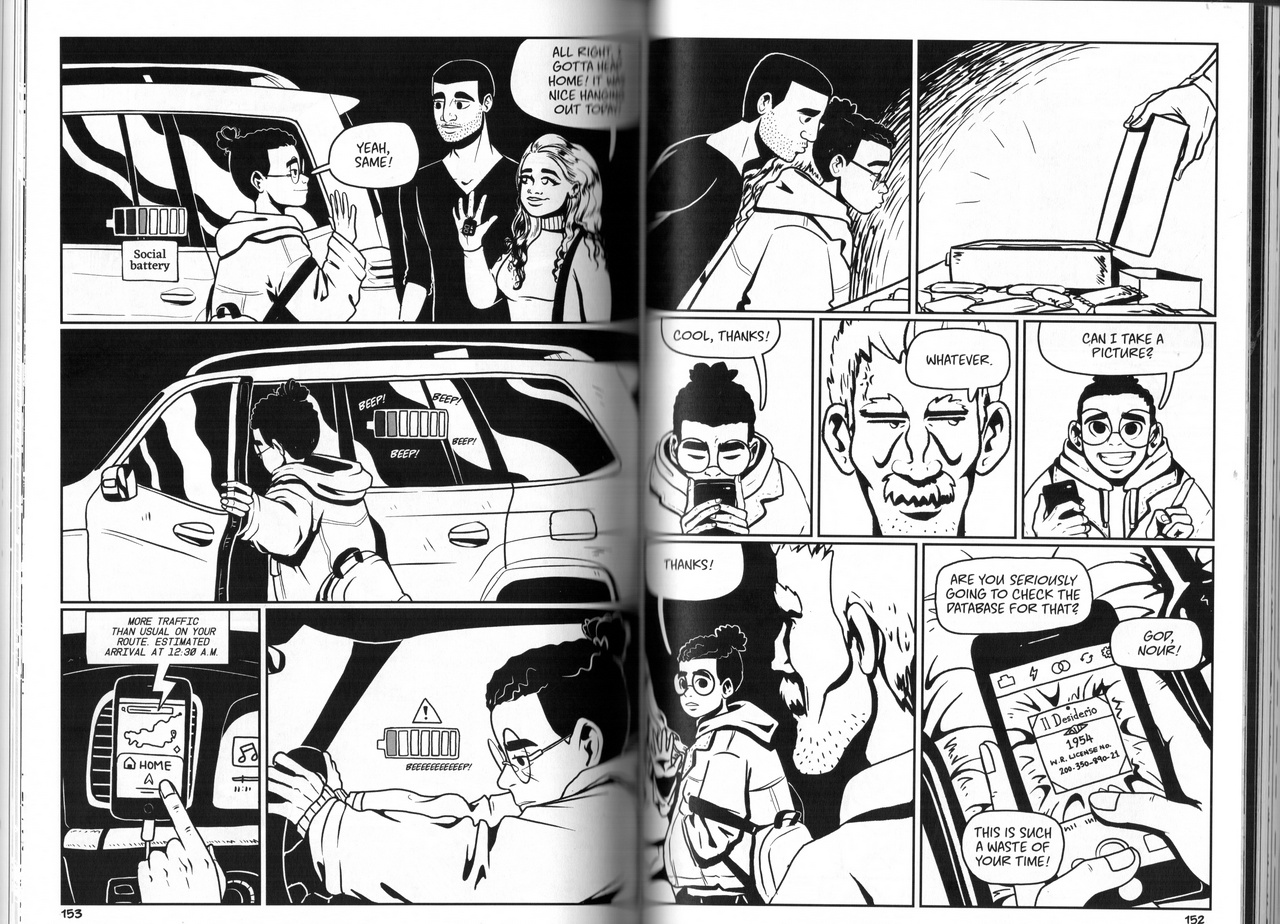 That's really how Deena does it. She takes the fantastical concept of wish-making, and grounds it in the trappings of our reality. In this way, wishes are essentially a commodity, another consumer good of varying quality depending on where and how it is produced. The better the quality of the wish, the more expensive it is, and thus not necessarily easily within reach. How can a wish ever be of mediocre quality, you ask? Well, you might get what you wish for, but with absolutely harrowing consequences. And I'll leave it at that. But through this conceit, Deena is able to build a very believable world where wish-granting exists and within this world, Deena is able to explore politics, class dynamics, colonialism, depression, gender identity, laws and regulations, and so much more, all while following a narrow set of characters who by the end one cannot help but feel are very real actual friends. And to be able to do all this while brimming so effortlessly with humor throughout? Near impossible. This is the kind of story someone like Neil Gaiman can only dream of telling (and I say this with love, because I love Gaiman's storytelling), told through the expert language of cartooning that only the likes of Spiegelman, Clowes, and Bryan Lee O'Malley have perfected. In fact, I might place Deena's approach squarely at the crossroads between those three cartoonists, although she is very much her own thing (not to mention what a sight it is to see an artist's craft grow so beautifully from the beginning of a book to its end). 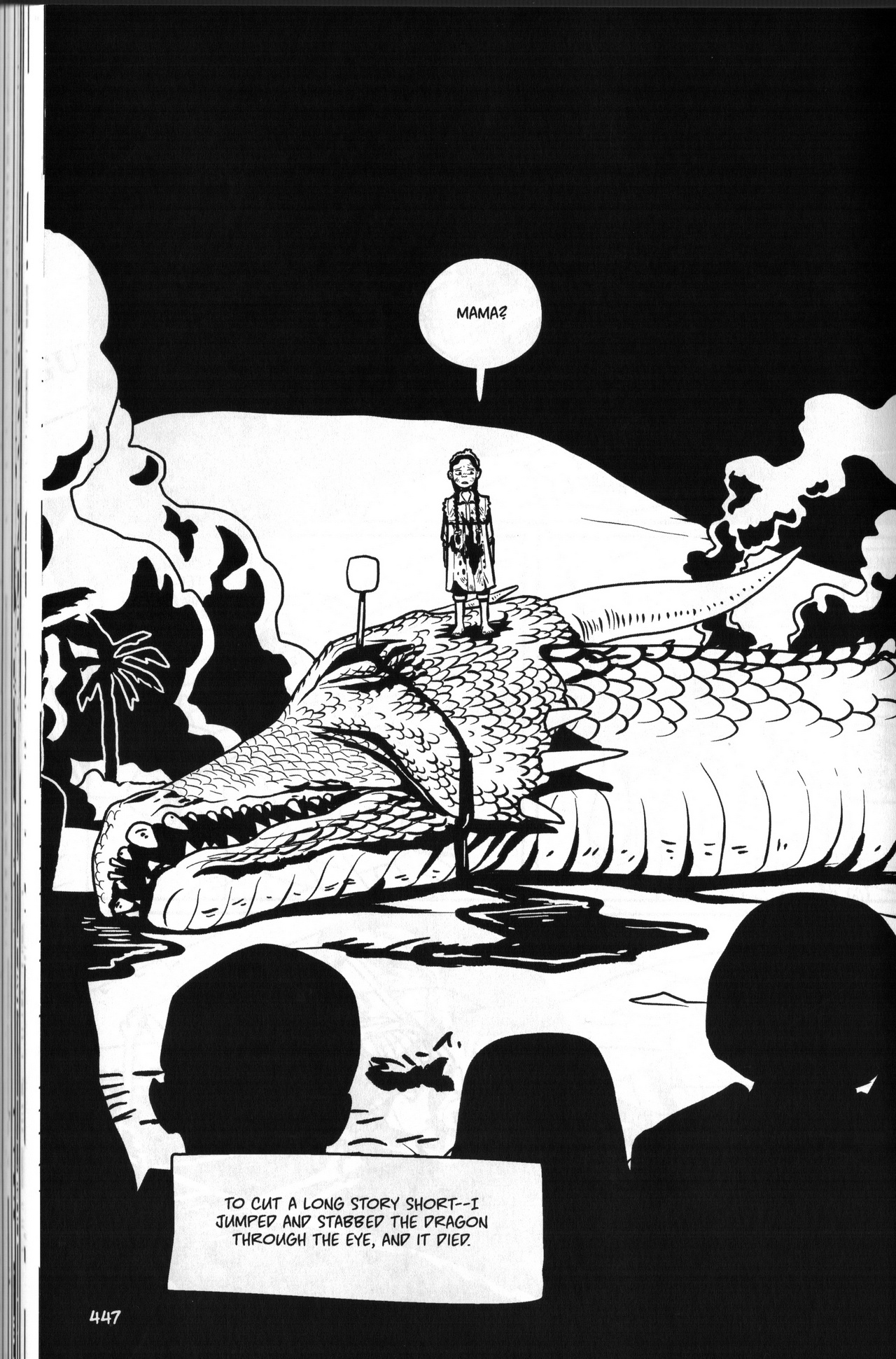 This right here represents the holy grail of comix-making and I cannot recommend it enough. Pantheon is certainly lucky for signing Deena up. SHUBEIK LUBEIK is an essential addition to any library concerned with the highest caliber of graphic literature.

(All images are from an uncorrected advanced reader's copy.) #comix