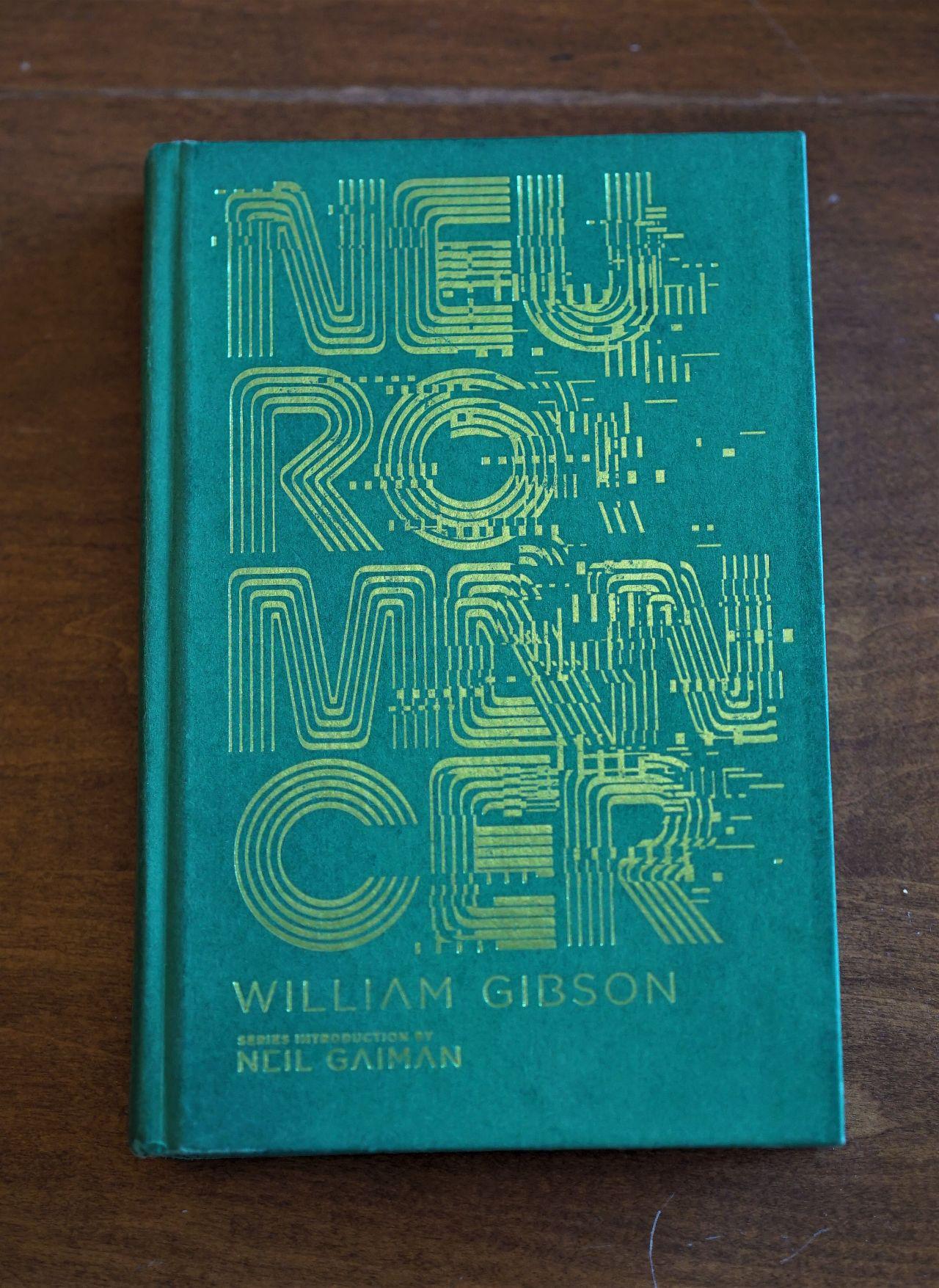 NEUROMANCER is not a good novel, but it is essential reading.

How do you figure that?

Well, the first thing that hits you when reading NEUROMANCER is Gibson’s inventive use of language. The opening line, which is not dialogue, not a bit of “action”, not anything pertaining to any character—but rather a mere description of a scene—is one of the most memorable opening lines in the history of literature:

The sky above the port was the color of television tuned to a dead channel. And that is actually very indicative of the entire novel. The characters negligible, the story unmemorable, but the passages: sheer magic. Most of the time, they won’t mean much, but that doesn’t mean you won’t be enchanted by them anyway.

Under bright ghosts burning through a blue haze of cigarette smoke, holograms of Wizard's Castle, Tank War Europa, the New York skyline.... And now he remembered her that way, her face bathed in restless laser light, features reduced to a code: her cheekbones flaring scarlet as Wizard's Castle burned, forehead drenched with the azure when Munich fell to the Tank War, mouth touched with hot gold as a gliding cursor struck sparks from the wall of a skyscraper canyon. Gibson, like Alan Moore, admits that he’s never cared much for plot, but unlike Moore, Gibson strikes me as someone who has very little to say (at least as far as his first novel is concerned), and rather than step away from the obsession with plot (that most entertainment writers are consumed by) in favor of a story’s core concern, Gibson seems to divert his attention entirely to the musicality of words.

Case triggered his second program. A carefully engineered virus attacked the code fabric screening primary custodial commands for the subbasement that housed the Sense/Net research materials. “Boston,” Molly’s voice came across the link. “I’m downstairs.” Case switched and saw the blank wall of the elevator. She was unzipping the white pants. A bulky packet, exactly the shade of her pale ankle, was secured there with micropore. She knelt and peeled the tape away. Streaks of burgundy flickered across the mimetic ploycarbon as she unfolded the Modern suit. Even when describing action, an actual plot point in the story, Gibson gets too caught up in the rhythm of fresh-sounding words, even if they do very little to affix the mind’s eye to the scene at hand. In fact, they typically serve to do the exact opposite, eject one from the story completely and instead get swept away by the sheer aesthetics of vocabulary, meaning be damned.

It is no wonder that even admirers of NEUROMANCER have very little to say about the story, and instead prefer to lean on Gibson’s invention of the word “cyberspace.” Of course, they also stress that one has to consider the time it was written: 1984, and as such realize how ahead of its time it really was.

While yes, envisioning a completely virtual world made capable by a vast network of computer mainframes that characters plug into in order to enter and operate within is indeed a visionary stroke of genius for that time, but let’s not forget that there was some degree of precedent to that idea in things like TRON (1982). Gibson is often credited with “envisioning” the internet before it happened, but a more accurate prophecy less soaked in fantasy can be found in the networked discussion forums imagined in Orson Scott Card’s ENDER’S GAME.

But yes, “cyberspace” as a word was indeed invented by Gibson in NEUROMANCER. And the book is full of like inventions. On every other page of the thing you’re bound to come across a new word:

And on and on. But after a while, you get the gimmick: slap two average words together and voila! A new exciting word emerges, much like “cyberspace”, or heck, the book’s very title for that matter: “Neuromancer”.

Not to downplay Gibson’s knack for inventing new words or his ear for the musicality of unexpected words following one another. It is, after all, the novel’s highest selling point as far as I’m concerned. Possibly even its only selling point, but not one to be undermined, for it will completely shed new light on the beauty of language and give you a purely aesthetic experience from the mere act of reading sentences.

But all of that comes at the expense of story.

Is it a good novel? No. Highly recommended? Hell yes.