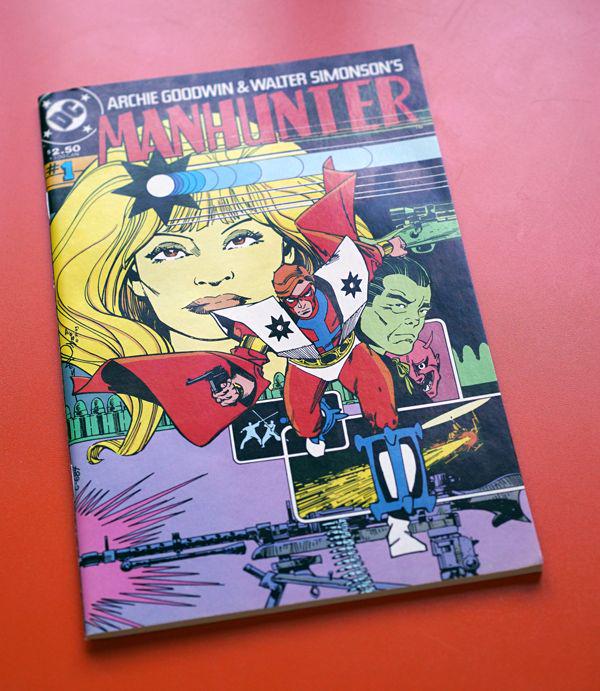 One of the best exercises in plotting I've ever seen came in a comicbook I don't think I'd normally be interested in picking up: MANHUNTER.

Yes, it has the names of Archie Goodwin and Walter Simonson on the cover, but it's a comicbook called Manhunter for Christ's sake. Look at what this supposedly fearsome Manhunter is wearing, my God. But, Warren urged me to check it out and I have never been disappointed by a Warren Ellis recommendation to date.

Lessons learned from this slim collection are numerous. First of all, it is an absolute joy to read! Which was such a breath of fresh air because more than once in the past few months have I found myself dropping a book out of sheer boredom. MANHUNTER will engage you from start to finish. I started reading it one night before bed, and found myself finishing it the next morning over cereal at the kitchen table, almost unable to put it down. Now if that ain't good storytelling, I don't know what is. As far as escapist fiction goes, forget DOC SAVAGE, or heck Michael Moorcock's ELRIC novels even (blasphemy, I know), but your blueprint for good ol' fashioned escapism is right here, because what Archie Goodwin did with this is pretty much toss in every pulpy plot trick known to man. Clones? You bet. Moles? Check. Conspiracy? Check. Super-healing? Check. Suspended Animation? Check. Teleportation? Yup. Mind-controlled machines? Oh yeah. Betrayal? Of course.

The book has it all, but what's most impressive is how it was all fit into such a slim package. Before it was collected into this 72-page edition in 1984, MANHUNTER ran as an 8-page backup story, serialized in a 1973 run of DETECTIVE, who's lead character was Batman. Sales were low, and the title needed spicing up, but Goodwin realized that he couldn't get away with doing anything too radical on the Batman. A backup story starring an unknown character, on the other hand, he could play with. A whiff of editorial genius pushed him to tap into the then young Walt Simonson, who did with Goodwin's loose plots some really groundbreaking work. If, like me, the notion of drawing or writing a 9-panel grid has ever brought about a feeling of dread, MANHUNTER is your remedy because Simonson will sometimes do a 13-panel page, and it will look beautiful, designed. The storytelling is clear, natural, and effortless. Somehow, the 9-panel grid looks like a walk in the park after studying Simonson's work on MANHUNTER.

Goodwin started out writing “Marvel style” on these with Simonson. Essentially, rather than giving Simonson full scripts, he gave him plots. Walt would then take these plots and use them to rough up his page layouts, which Goodwin would then use to work in dialogue and captions. Such was the collaborative nature of this thing that by the 3rd or 4th episode, Goodwin no longer wrote the plots and instead just talked them out with Simonson. Ideas bounced back and forth between them with such excitement that you can actually feel it reading the comicbook.

Sure, it's rather hoaky in many parts, but it's good hoaky. And in a very short amount of time you somehow find yourself growing rather fond of this ridiculously dressed man who calls himself Manhunter. His adventures take him from Nepal to Marakech to Istanbul, Japan, and Nairobi. It's rather genre defying in that it's part spy thriller, part detective mystery, part super-hero adventure. All of this in 8-page episodes! I don't recall ever seeing that before. A true masterclass in condensed adventure-storytelling.

Now, everything I've mentioned so far is evident of MANHUNTER being made up of a great deal of plot, and nothing much else, which goes against my argument for “sly escapism”. And I think that towards the last episode when it came time to end the story, Archie Goodwin realized that if his story didn't have some kind of point to it, then all the amazing plotting he'd conjured up would amount to absolutely nothing. So he gave it a point and it's a really good one [spoiler alerts are for pansies]. He made it a story against the idea of resurrection and prolonging of life. A story about accepting death when it is time to die. I may be giving this fun little adventure tale more depth than it calls for, and I fully acknowledge that there's no way in hell this comicbook will interest anybody not already interested in comicbooks about costumed superheroes. It definitely doesn't transcend the genre in the way something like, say, WATCHMEN does, but you can be sure that Alan Moore and Dave Gibbons were informed by the storytelling techniques employed in MANHUNTER if nothing else.