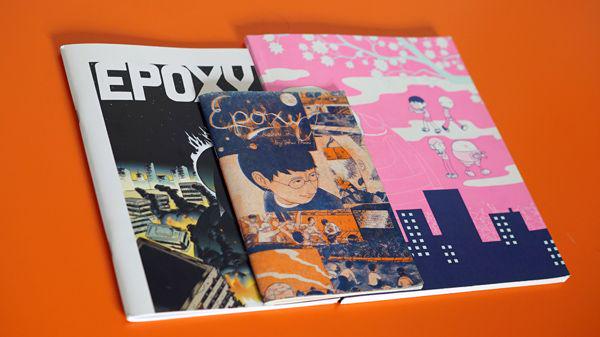 I have a soft spot for beautiful print objects and well-designed zines. I envy comicbook auteurs the likes of Adrian Tomine and Daniel Clowes, who are masters of both art and story. And boy do I get off on experimentation with format. John Pham pulls that all off in his beautiful self-published anthology series EPOXY.

The first issue, published in 2000, is without a doubt, the least experimental of the bunch, at least as far as production goes. Comprised of 64 pages printed in black & white, wrapped in 4-color cover, it doesn't feel like anything out of the ordinary, until you read the the stories within. The first story, SHIVA, involves a humanoid robot on the run from a flying dragon in a futuristic version of the Vietnamese city of Hue.

The second story, ELEPHANTINE, is about a one armed boxer who cannot be beat, until maybe something happens to his corner-man. The third story, MODESTO, sandwiched between the other two, is more of a traditional slice-of-life story about the shenanigans of a teenage Vietnamese-American girl who has a big family reunion dinner party to look forward to.

For EPOXY's second issue, Pham opts for a smaller zine-like cut, but ups his production game with a risograph print. A two-color beaut for the cover, and a close-to-florescent green for the interiors. Both ELEPHANTINE and MODESTO continue where they left off, but SHIVA is oddly nowhere to be found. 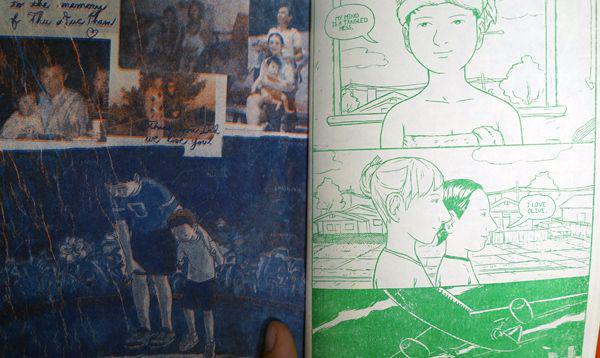 Enter issue #3, which is the size of a book in its own right, with spine and everything. The format larger than the previous two, and took Pham two years to produce. In it, he concludes SHIVA. And halfway through the book, he introduces another story, ASTROGIRL, done in a style that is somewhat akin to Chris Ware's work.

With issue #4 and #5, John Pham takes his work into a completely new direction like nothing I've seen in comix. Both are printed on a risograph, and John really takes advantage of what he can do with the machine with just 2-3 colors, getting grains of blues and oranges and pinks to mix in fresh interesting ways. The result is something that can only be produced on a risograph and no other way.

The main storyline is called DEEP SPACE, an avant-garde sci-fi piece about a traveler landing on a weird planet.

Also inside the issue are two miniature magazines actually stapled inside. One of them is a funny mini-comic titled JAY & KAY, and the other a satirical magazine called COOL MAGAZINE, filled with miniature crossword puzzles, fake interviews and product reviews.

With these last two issues, Pham really elevates his practice to create something much closer to fine art than comicbooks. The way the three original stories came to an end feels somewhat abrupt, but it doesn't take away from joy of experiencing them. Not entirely unlike say, Daniel Clowes' GHOST WORLD. Although, if I'm completely honest with myself, my reason for following John Pham in the future will not necessarily be his stories, but rather for his storytelling, and how he makes use of illustration, design, and printmaking to such superb effect, which is such a rarity in most comix these days.