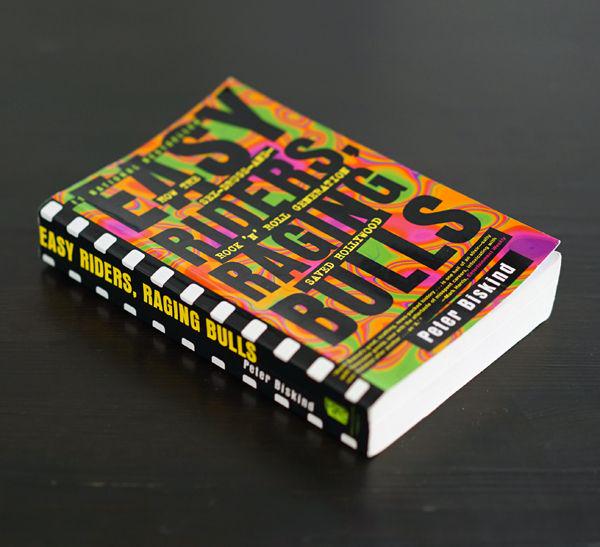 When the two [John Wayne and Dennis Hopper] were working on True Grit, Wayne once flew his helicopter in from the minesweeper he kept at Newport Beach, landed on the Paramount lot, swaggered onto the soundstage with his .45 hanging from his belt, and bellowed, “Where's that pinko Hipper? That goddamn Eldridge Cleaver's out there at UCLA saying 'shit' and 'cocksucker' in front of my sweet daughters. I want that red motherfucker. Where is that commie hiding?”

Like the war between old gods and new in Gaiman's AMERICAN GODS, EASY RIDERS, RAGING BULLS chronicles the battle between Old Hollywood and New. Well into the 60's, Hollywood was still churning out the glamorous musicals and John Wayne Westerns that were popular in the 50's, but America was a different place that the big studio bosses didn't quite get or understand. Anti-War protests and the Civil Rights movement were taking hold. The already popular Nina Simone began addressing racial inequality in her songs, and Bob Dylan became the most popular singer/songwriter in the country, second possibly to The Beatles, who, even they –mere pop artists– couldn't avoid addressing the horrors of the Vietnam war. Television was new, and it was on TV that you could get a glimpse of people like Bob Dylan and The Beatles, who neither looked, sounded, or behaved like anyone on the silver screen. Television was also where you could see mad, groundbreaking ideas for the first time. Things like Star Trek and The Twilight Zone were miles ahead of any feature-length film starring John Wayne or Elizabeth Taylor.

As the studios began to lose a lot of money, the control enacted over film-making was relinquished to smaller production outfits, which started giving directors full control over how they made movies. So radical were the results that first time filmmakers like Dennis Hopper, Francis Ford Coppola, and Martin Scorcese became stars almost overnight.

And yes, you read that right. Dennis fucking Hopper. EASY RIDER is America's first biker movie, and thus spoke to Americans at the time in a way that no other film ever had. According to Biskind, it largely involved Hopper dicking around on set. The “set” being America's open roads. Nevertheless, it cost $501,000 to make, and brought $91.1 million in rentals. A huge, and very unexpected, return on investment. It won the First Work Award at the Cannes Film festival and was nominated for two Oscars, and Hopper was subsequently christened by LIFE magazine as “Hollywood's hottest director.” It was 1969, and the gates of Hollywood finally swung open to welcome American counter-culture for the majority of the 70's. Arguably, the best decade in American film-making until Spielberg and Lucas showed up to introduce the formula for what would become the, ugh, summer blockbuster.

The book is a treasure trove of “New Hollywood” history, and delves with great detail into some of the horrors, trials, and tribulations involved in making some of America's greatest films. Warren recommended it to me, after I had listened to this NPR interview with Coppola about the difficulties faced in making THE GODFATHER. And let me tell you, what is revealed in that interview is nothing compared to what's in this here book. Not just in regards to Coppola, but pretty much every American filmmaker who rose to prominence in the 70's.

Paul [Schrader] made the call to his agent, Michael Hamilburg, said, “This is The Godfather meets Bruce Lee. It's gonna sell for sixty grand. You get a third of the money, I get a third, and Leonard [Schrader] gets a third.”

Hamilburg gave them $5,000 on the spot. The brothers arrived in L.A. around Thanksgiving and rented a tiny apartment on Bicknell in Venice, a block from the beach, for $90 a month, which Hamilburg paid for. They took the bedroom doors off the hinges, stole some cinder blocks from a construction site, set up two desks, one in each bedroom, facing each other. The only other piece of furniture was a massive butcher block coffee table with wrought iron legs. They rented two electric typewriters, wrote three drafts in about eight weeks. They wrote around the clock, twenty, twenty-two hours a day, worked ten hours, slept one, very little food.

Toward the end, around Christmas of '72, they were running out of money, even though they were spending less than a dollar a day, $7, $10 a week for food, stealing plastic envelopes of ketchup from restaurants, making tomato juice.

“We sat down, took a good look at the script, and said to each other, 'We gotta write it one more time,'” recalls Leonard. “We were just wiped out, needed to find the energy to write one more draft. For us, the only surefire source of that big a jolt was guilt. We talked about, 'How we gonna get' – you didn't wanna go out and rob somebody – 'the guilt?' My brother said to me, 'We'll go to Vegas, lose our money, we'll feel so guilty, so pissed off, we'll come home and finish the script.'”

And sure enough, they did. And a couple paragraphs later:

Says Leonard, “There was an auction, sixteen bidders, it was the highest amount for original script ever sold at that point: $325,000.”

The film that came out of it, THE YAKUZA, directed by Sydney Pollack, is... well, alright. But it did open the gateways for Paul Schrader who went on to write TAXI DRIVER and RAGING BULL, and eventually direct his own films, like HARDCORE and AMERIAN GIGOLO. But not before screwing his brother over.

When the dust settled, instead of an easy three-way split, The Yakuza money was split 40-40 between Paul and Hamilburg, with Leonard getting only 20 percent. “I wanted to have that sole screenwriting credit, so I made him take shared story credit,” says Paul. Leonard looked the other way, pretended it hadn't happened.

Even though THE YAKUZA was originally Leonard's idea for a novel, before his brother convinced him to co-write it as a screenplay with him. Such personal stories aside, one can't help but see the overarching parallels between then and now. Like Old Hollywood back then, Hollywood today has been riding the wave of an old formula – the summer blockbuster – since well, the 80's really. Like Television in the 60's, the Internet has sprung up as the new media outlet through which one can experience things a little closer to today's equivalent of “counter-culture.” The internet became home to some of Cory Doctorow's first novels, it is where the art of Molly Crabapple first saw the light, where live video was being broadcast from the heart of the Arab Spring, where people are Tumbling their homemade unairbrushed porn, where kids are producing microfiction using cell phones, and where you can hear Kim Boekbinder sing Pussy Grabs Back in response to Donald Trump.

Again, there is a sense that big media outlets are stuck in their old ways, producing things that are far removed from the pulse of now. But if recent hits like MOONLIGHT and GET OUT are any indication, it seems like Hollywood may be catching up. MOONLIGHT is an honest portrayal of homosexuality in an African American community. GET OUT unapologetically tackles the horrors of racism by way of a popular genre film. One of them won the Oscar for best film, and the other is the highest grossing film by a writer/director in the history of American cinema. These are game-changers that tell us that the decade to come will be nothing short of a cultural revolution. And that excites me.