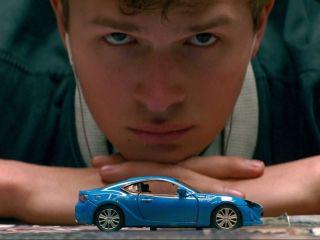 A young guy named Baby, whose name isn't really Baby, is the go-to getaway driver of a very bad man named Doc who turns out to be not all that bad after all. Doc assembles a different crew for each of his heists, but Baby is a constant because he's just so fucking good. Baby wants to get out of the game though, and this desire is brought to the forefront when he falls in love with a cute waitress all in the span of a 5-minute conversation.

The waitress, whose name I cannot recall because of her utter lack of personality, sweeps Baby off his feet for no other reason than she flirts, laughs at Baby's jokes, has a pretty voice, and is readily willing to go on a murderous crime spree with Baby even after being stood up by him just the other night (huh?). Oh, and Baby's deceased mom used to be a waitress at the very same diner (oh I seeeee).

Listen, I love Edgar Wright to no end and I was actually super excited to watch BABY DRIVER. But the movie might as well have been scripted by a poorly-written algorithm. There isn't an inkling of originality in the film, aside from a handful of quirky moments from some of the characters. It's the same heist movie you've seen a million times, albeit a lot more Disneyfied.

Typically, I'm not one to care much for plot anyway, and do believe that how a story is told contributes to the originality of a story more than anything, but even in the storytelling department I'm afraid Wright has severely underperformed. Much has been written about how BABY DRIVER is the perfectly synchronized heist ballet, with all the stunts perfectly choreographed to sync to the soundtrack Wright had already decided on over 20 years ago. Lies, I tell you, lies!

The stunts are not synched. The editing is synched. We've all watched the music videos of Spike Jonze and know what choreographing live action to music actually looks like. And BABY DRIVER is not that. The closest it gets to achieving anything remotely close to that is a scene void of stunts in which Baby is walking down the street to fetch coffees for the gang. It is also the only scene in which you get a true sense of place, Atlanta, where the film was shot on location. The rest of the entire thing, except for a handful of aerial shots, might've easily been shot within the sterile confines of a production studio's lot.

And y'know what? All of that could've been fine, just fine. If you're going to give me a plastic plot acted out by plastic characters in a plastic setting because you're using them as an excuse to do some really cool stunt scenes against the backdrop of your favorite music, well even that would've been fine, but the car chases that dominate the movie deliver less thrill than watching a leaf fall off a tree.

Edgar Wright's BABY DRIVER shows that he's got style, knows where the funny is, and has a good ear for music, but an auteur he is not.

(As for the public's fascination with it? It shows that holy shit, we're doomed! DOOMED!)